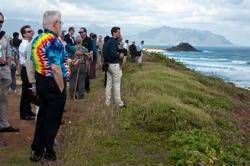 The Navy hopes to expand its testing for ocean wave energy power generation in Hawaii, having been testing an energy buoy in about 100 feet of water off Marine Corps Base Hawaii in Kaneohe Bay for about 10 years.

The Navy now hopes to put two more buoys in water more than 200 feet deep, and the greater depth will allow it to test larger devices closer to the size it needed to generate energy for customers.

Bob Frederickson of the Naval Facilities Engineering Command said the new buoys are the next step toward commercializing wave energy.

The buoys would be installed only after the Navy obtains required environmental permits.

The Navy hopes to provide wave-produced energy to the Marine base in 2014.