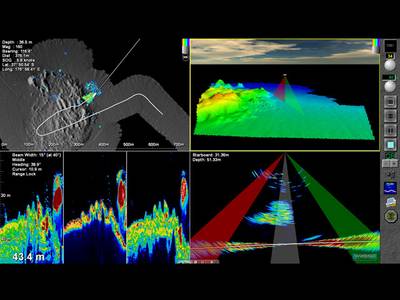 “Although WASSP was originally designed for commercial fishing, when the company first started promoting WASSP globally in 2006 most of the interest came from scientists and surveyors mainly because WASSP multibeam sonar technology was such a new concept to the commercial fishermen compared with the split-beam or single beam sonar traditionally used in this market,” says ENL Group CEO Gareth Hodson. “In fact, the first two WASSP systems we sold in 2006 were to a survey company in the Middle East.”

With ENL Group’s expertise known for providing marine electronics in the commercial fishing sector for over 65 years, the company has continued to focus on this sector establishing a customer base and distribution partners to support the product. Not only is WASSP Ltd now offering an advanced and backward compatible WASSP solution to its existing target market, the WASSP Ltd product management team have focused on enhancing the common functions and features also used by other marine professionals in the hyrdrographic survey and work boat market. While WASSP is not new to the hydrograhic survey market the new range, in particular the WMB3250 (formerly known as WASSP S), has been specially designed for this sector.

“Our main focus had always been with the commercial fishing sector, a market we are very familiar with. Effectively we have been pulled into the survey market and have gained a great deal expertise and understanding of user requirements after a beneficial OEM agreement with an organization that has been successful in this market for many decades.”

The company has sold more than 550 units in the commercial fishing sector. WASSP Ltd parent company, ENL Group has invested in the new range to strengthen its number one position in the commercial fishing sector and also to build a product tailored to the survey and workboat market with new features and functions. With WASSP now available in 39 countries, the launch of the new multi-beam sonar’s in 2013 is a significant milestone in the company’s 65-year history.“We have seen increased demand from a broad spectrum of the professional marine industry from workboat to defense and high-end leisure. WASSP will look to introduce further new products in the coming years.”

WASSP Ltd will be exhibiting at the upcoming Ocean Business 13 exhibition, April 9-13 in Southampton UK. During the exhibition WASSP carry out live on water demonstrations of its multibeam sonar system.