Getting to the Bottom of the Navies' Mine Warfare Challenges 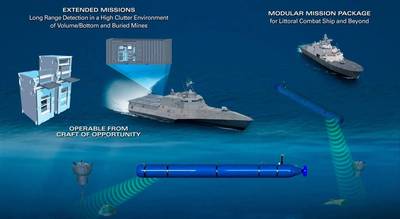 The General Dynamics Mission Systems Bluefin Robotics Knifefish UUV detects, classifies and identifies volume, proud and buried mines in high-clutter underwater environments, and is a critical element of the LCS Mine Countermeasure (MCM) mission package. Knifefish’s job is to detect, avoid and identify mine threats, reducing the risk to personnel by operating in the minefield as an off-board sensor while the host ship stays outside the minefield boundaries. Knifefish also gathers environmental d

To find the mine warfare challenge with the highest degree of difficulty, start at the bottom.

Lurking unseen below the surface, naval mines pose a serious problem.  They’re cheap, relatively easy to deploy and can inflict heavy damage against even the most sophisticated warships.  They can be hard to detect and difficult to counter. What you can’t see can hurt you.  And the most difficult mines to find and eliminate are bottom and buried mines.

Navies have developed ships to hunt for mines in the water column so they can be avoided or destroyed, use influence sweeps to detonate them; or cut their moorings so they surface and can be destroyed.  Aircraft can also tow systems to find or induce mines to detonate.  Unmanned systems can help find mines in the water column or see objects on the bottom that might be mines.  But seeing mines that are flush with or buried under the sea floor takes sophisticated technology.  Unmanned underwater vehicles (UUVs) can perform this mission, but they must be vehicles with the right combination of power, propulsion, sensors, data collection and analytics that can help a trained operator with the right tools can find those mines with a high degree of confidence.

Even if one suspects the presence of buried or bottom mines, searching for them is likely to be a lengthy process. Vehicles must be stable, with excellent position keeping so the location of any mine like objects detected can be accurately marked for further investigation, neutralization or avoidance.  The vehicle may have to conduct prolonged and methodical search patterns, and that may require a vehicle with a lot of power and endurance, which translates to a lot of batteries, and thus a bigger vehicle for those larger search areas.  The size of the vehicle also has bearing on the size of the sensor package, although sophisticated sensors are becoming smaller and smaller, and can also fit on smaller vehicles.  Vehicles must be recovered and recharged or batteries swapped out.  Some UUVs are fully flooded, with the payloads and batteries in small, pressurized modules.  Others are fully pressurized but have to be depressurized before they can be opened and the batteries or hard drives removed. There have been prototypes of underwater fixtures that can download data to be sent back to the mother ship and recharge the batteries, either through induction or a physical connection.  This “underwater garage” has to be put in place and is susceptible to environmental factors such as corrosion and bio fouling.

In most cases, vehicles must return to the host platform to have the data storage device physically removed and connected to the computers for processing the data.  That means a launch and recovery cycle. Some vehicles can do processing on board, which means less time is required on the host ship.  Automatic Target Detection and Recognition (ATF/ATR) and the ability to compare target data with known mines using a library such as the U.S. Navy’s Mine Warfare and Environmental Decision Aids Library (MEDAL), can alert a host platform that a possible mine has been found, and shortening the decision-making cycle required to act on that specific threat.  That presupposes that the underwater vehicle can communicate with a surface buoy or surface and send a message by satellite or other means; but, if that’s the case, a launch and recover cycle can be avoided or delayed.

The Naval Research Laboratory (NRL) is a scientific and engineering command dedicated to research that drives innovative advances for the U.S. Navy and Marine Corps from the seafloor to space and in the information domain. NRL is located in Washington, D.C. with major field sites in Stennis Space Center, Mississippi; Key West, Florida; Monterey, California, and employs approximately 3,000 civilian scientists, engineers and support personnel.
https://www.nrl.navy.mil/

Penetrating problemMines laying on the seabed can be hard to detect among the clutter of rocks, seaweed and waste. “The more objects you detect, the more time you need to make a proper classification,” said Cmdr. Herman Lammers of the Royal Netherlands Navy, director of the NATO Naval Mine Warfare Centre of Excellence in Ostend, Belgium.

“Buried mines lie completely under the seabed, are fully covered, and can only be detected with specialized, bottom penetrating sonar systems, or other sophisticated detection systems like magnetic anomaly detection,” said Lammers. “For buried mines it is even more difficult, as you have to look into the bottom to detect them. At the moment there are only very few sonar systems that are able to do so,” Lammers said.  “It’s only possible to classify them, but you can’t identify them.”

“Penetration sonar systems are low-frequency systems and are for the moment quite large to deploy from a ship, or incorporate into a UUV,” Lammers said.

The Naval Research Laboratory (NRL) in Washington, D.C. has developed Low-frequency broadband (LFBB), a technology area that exploits the structural acoustics involved with underwater sonar.  According to Dr. Brian Houston, Acoustics Division Superintendent at NRL, LFBB can go beyond determining if something is there, it can also determine what it is.

“When you transmit sound, the acoustic return is very different depending on the physical object that is reflecting that acoustic energy.  It might be a naturally occurring thing like a rock on the bottom, or something that’s man-made, like a mine. In the water column, it might be a submarine versus a whale.   What’s in the acoustic return is very different for each of those targets.  Sonar has traditionally helped us know where something is, how far a way it is, and sometime provides an image.  But in addition to bearing and range, we can now determine what it is.  That return has specific physics in it that we can exploit, and we can know something about the physical object and based on how it responds.

Houston said LFBB is both a sensor approach as well as the methodical analysis of data. “We are now doing a lot of onboard processing, so we can take the data and process it on board the vehicle to enable autonomy decision making,” he said.

The General Dynamics Mission System Knifefish 21-inch UUV uses the LFBB technology and is the only system currently available that is capable of detecting, classifying and identifying buried mines in a high-clutter environment. Knifefish is a program of record and part of the Littoral Combat Ship (LCS) Mine Countermeasures (MCM) Mission Package.  According to a Navy statement, The Navy plans to procure 30 Knifefish systems--24 in support of LCS Mine Countermeasure Mission Packages and an additional six systems for deployment from vessels of opportunity.

The Naval Mine Warfare Centre of Excellence supports NATO and its member and partner nations by providing comprehensive expertise on Naval Mine Warfare.  It is one of 27 NATO-accredited COEs that contribute to NATO transformation and operational efforts; capability development process; mission effectiveness and interoperability through concept development and experimentation; doctrine development and standardization; exercises, education and training; and analysis and lessons learned.  The work between NATO and the COEs is coordinated by NATO Allied Command Transformation in Norfolk, Virginia.
https://www.nmwcoe.org/