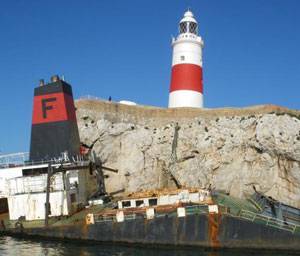 Donjon Marine was awarded a contract to remove and dispose of the M/V Fedra in Gibraltar, the southern-most tip of the Iberian Peninsula that borders Spain.

Donjon Marine, Co., Inc., a provider of multi-faceted marine services including marine salvage, heavy lift, dredging and related emergency response services, was awarded a contract on March 24, 2009 for the wreck removal and disposal of the remnants of the M/V Fedra. On October 10, 2008, during a significant storm, the M/V Fedra grounded and subsequently sank off the eastern side of Europa Point in Gibraltar in approximately 20 feet of water. As a result of the grounding and pounding of the vessel due to sea conditions, the vessel separated in two pieces at the forward end of No. 6 Cargo Hold. The vessel had seven cargo holds in total. The separated forward section of the M/V Fedra was subsequently removed from the casualty site, leaving the remaining stern section.

Owners of the vessel, in consultation with their underwriters, called for competitive bids from the worldwide salvage community and Donjon was awarded the job.  Donjon will begin site operations during the middle to end of May 2009 with the major wreck removal assets to arrive from the United States in early June 2009. As the wreck removal operation is being performed in open ocean conditions, weather will be a significant concern as the project moves forward.