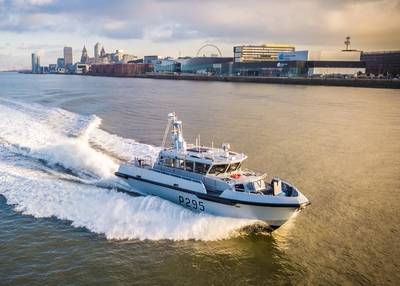 HMS Cutlass, the first of two new vessels being built for the Royal Navy Gibraltar Squadron, has undergone initial trials.

Over recent weeks, the new HPB-1900 has been subjected to rigorous trials to test all systems and performance against a demanding set of requirements specified by the Royal Navy.

HMS Cutlass, and the forthcoming HMS Dagger which is expected to be delivered in Q4 2022/Q1 2023, will be essential assets for the maritime defense and security of Gibraltar and its surrounding waters. Both vessels are a major step forward in capability for the Royal Navy Gibraltar Squadron.

Alongside the RNPL Project, the MST Group is also working in conjunction with BMT on the HPB-1500 Police Patrol Craft being built for the UK Ministry of Defense Police (MDP) and Gibraltar Defense Police (GDP). These vessels will join MST’s growing range of well-proven High Speed Patrol Craft which now range from 10.5m up to 23.0m in length.