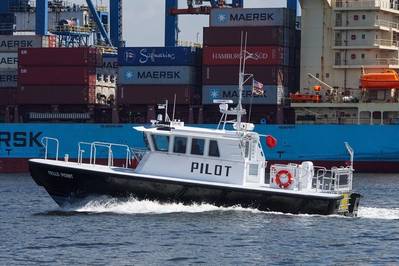 The Association of Maryland Pilots has taken delivery of a new class of pilot boat from Gladding-Hearn Shipbuilding, Duclos Corporation. Called the “Baltimore Class” after the pilots’ base of operations at the Port of Baltimore.

With a length overall of 48.5’, beam of 15.6’, and draft of 4’, the all-aluminum pilot boat features the Ray Hunt Design deep V hull. It is powered by twin Volvo Penta D13, EPA Tier 3-compliant diesel engines, each delivering 600 hp at 1,900 rpm, with a top speed of 30 knots. A Humphree interceptor trim-tab control system, with its Automatic Trim Optimization, is installed at the transom.

The wheelhouse, flush-mounted to the deck amidship, features a center-line helm station, five Norsap shock-mitigating reclining seats, a bag rack, refrigerator and a 16,000 Btu reverse-cycle HVAC unit. A second 12,000 Btu HVAC unit is installed in the unfinished forecastle, which includes a Porta-Potty, tool box and storage for safety gear.