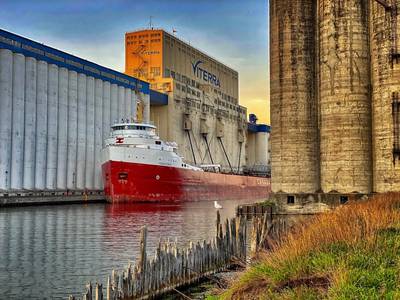 Canadian grain shipments through the Great Lakes-St. Lawrence Seaway trade corridor are up 20% in response to continuing world demand for wheat and canola, the latest figures show.

Year-to-date shipments of grain (from April 1 to August 31) totaled 5.2 million tonnes, as ships transported Prairie wheat and canola and Ontario wheat and soybeans for both domestic use and for export to markets around the world.

The rush of grain, which is carry over from last year’s crops, has helped to offset continuing pandemic-related declines in other key cargoes such as iron ore (down 23%), dry bulk (down 11%), and liquid bulk (down 23%). Overall year-to-date cargo shipments via the Seaway totaled 19.3 million tonnes, down 8% compared to the same period in 2019.

“The Great Lakes-St. Lawrence Seaway serves as a key trade gateway for farmers in Ontario, Quebec and the Prairies, but also across the American mid-west,” said Terence Bowles, President and CEO of The St. Lawrence Seaway Management Corporation. “Our customers are expecting good harvests from all of these regions this year and the Seaway is poised for a big push of grain exports right up to the end of the year. In these precarious times, our binational transportation corridor will be more essential than ever to the economic recovery of both Canada and the United States.”

The Port of Thunder Bay, the largest grain port on the Great Lakes, reported that it was on track for its best cargo year in decades as ships lined up to load Prairie wheat and canola destined for Europe, South America, the Caribbean, the Middle East and Africa. Port facilities have handled an extra million tonnes of grain compared to this time last year, a 27% increase. “Our year-end projection for our overall cargo tonnage is narrowing in on the 10-million tonne mark,” says Tim Heney, President and CEO of Thunder Bay Port Authority. "That much volume hasn’t been handled in Thunder Bay in a single year since 1997.”

Demand for Western Canada’s large 2019 harvest accelerated this spring, as global supply chains were disrupted with the onset of the COVID-19 pandemic.

However, Heney adds, that grain volumes through the port have been trending upwards since the Canadian Wheat Board was dismantled in 2013. “Grain volumes are always impacted by the quality of harvests and fluctuating demand from world markets. But Canadian grain handlers are now marketing their own wheat and also looking to maximize efficiencies in their supply chains. The Port of Thunder Bay has the fastest rail-car turnaround and ship turn-around times and that’s continued and even improved during the pandemic, despite extensive extra safety protocols.”

Burlington-based ship operator McKeil Marine also reported that its grain volumes were up 13% in August, and it announced this month that it had acquired a bulker vessel from Europe that will be delivered to Canada to add to its domestic fleet. Built in 2012, the M/V Juliana will be re-flagged as a Canadian vessel and be renamed the Harvest Spirit. The Harvest Spirit will service a long-standing customer of McKeil who is striving to meet the strong market demand for Canadian grain, soybean and canola products.

McKeil’s President, Scott Bravener, highlighted, “Nationally, our grain markets continue to perform well. In fact, the demand for Canadian grain is booming, which is particularly encouraging news in these challenging times. Our grain exports are bolstering overall cargo shipment volumes in the Great Lakes and St. Lawrence Seaway and the Harvest Spirit will allow for McKeil’s continued growth in this robust domestic market.”

“We have attracted more than $200 million in new agri-food sector investment at our ports inside the last decade,” said Ian Hamilton, President & CEO of HOPA Ports. “As crop yields continue to improve, and as new trade agreements like CETA create more export opportunities, these ports will be even more essential for Canadian producers.”

With the 2020 shipping season in full swing, bulk cargo shipments have remained strong at the Port of Toronto as shipments of cement, steel, salt and sugar continue to be received.

Geoffrey Wilson, CEO, PortsToronto, said, “Though the global COVID-19 pandemic has had an impact at the port, with federal regulations effectively cancelling the 2020 cruise ship season, port tonnage has remained consistent with this time last year and the Port of Toronto is well positioned for the remainder of the shipping season.”

Port Windsor reported that it has bounced back from a slow spring start caused by the delay in the Seaway opening and the Ontario COVID Emergency Order that shut down construction for several weeks. From a spring decline of -18% compared to 2019, overall cargo volumes have surged to recover more than 12% of that deficit over the summer.

Steve Salmons, President and CEO of Port Windsor, said, “Grain shipments are up 12% over 2019, the highest in more than five years. Aggregates continue their rebound in response to several large regional road projects, and the construction of the Gordie Howe International Bridge. Salt shipments are also maintaining their historic high levels in preparation for the coming winter months.”