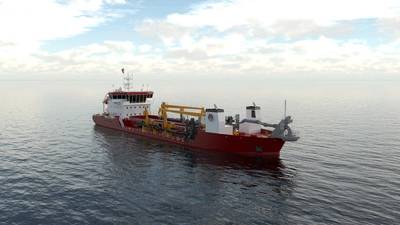 Expected to be delivered in the first quarter of 2025, the new vessel will be a sister ship to the Galveston Island, presently under construction with delivery in early 2023.

This newbuild is identical to the Galveston Island and will feature two 800mm suction pipes and will be able to dredge at depths of up to 100 feet, with principal dimensions of approximately 346 feet in length, 69 feet in breadth, 23 feet in depth and 16,500 total installed horsepower.

The dredge will be equipped with a direct high-power pump-ashore installation, dredging system automation, dynamic positioning and tracking, U.S. EPA Tier IV compliant engines, and additional features designed to minimize the impact of its dredging process on the environment. The Tier 4-compliant engines significantly reduce the vessel’s climate footprint, while other incorporated features minimize turbidity and marine species entrainment. Best-in-class accommodations feature single-occupancy staterooms, a workout room, and an innovative movie theater with raised seating that doubles as a training facility.

Lasse Petterson, President and Chief Executive Officer commented, “As the leader in the U.S. Dredging industry, Great Lakes continues to strategically invest in its dredging fleet. This highly automated newbuild vessel will be well-suited to multi-use applications on various project types. It will be deployed for channel deepening, maintenance dredging, beach nourishment, and coastal restoration projects to meet our nations’ maritime infrastructure needs. This vessel reinforces our commitment to the U.S. Army Corps of Engineers and the robust U.S. dredging market.

“Construction of the Galveston Island at Conrad has progressed on schedule and on budget. We are very pleased with the quality of construction and our strong partnership with Conrad.”