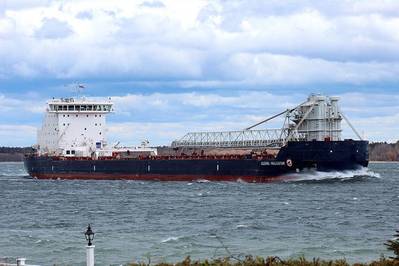 United States grain exports via the St. Lawrence Seaway are up 32.1 percent this season compared to 2017. Construction materials were also heavily influential in the latest results with a nearly 38 percent increase in asphalt from the same time last year, as well as increases in cement and stone.

“Summer is the season for construction projects and ships have been delivering materials for major building projects across the region,” says Bruce Burrows, President of the Chamber of Marine Commerce. “U.S. grain exports are also up this season and illustrate the importance of marine transportation to so many of America’s economic sectors. This was underlined by a new study released last week showing Great Lakes-St. Lawrence shipping supports 147,500 jobs and U.S.$25.6 billion in economic activity in United States.”

Overall cargo shipments on the St. Lawrence Seaway between March 29 and June 30 totaled 12.1 million metric tons, down by 2 percent compared to the same period in 2017. The slight decrease is due to the later and slower start of the season and a decline in salt shipments.

Year-to-date U.S. grain shipments via the Seaway (between March 29 and June 30) totaled 681,000 metric tons, up 32.1 percent compared to the same period in 2017. Liquid bulk shipments, which include petroleum and asphalt products among others, totaled 1.8 million metric tons – up 28 percent. Stone shipments were up 32 percent and cement shipments were up 24 percent.

The Port of Toledo’s grain terminals are having a busy spring and early summer shipping corn, soybeans, oats and distiller’s dry grains. Overall June 2018 numbers were nearly identical to June 2017; however, grains made a big jump in June, up 85.5 percent. “Heavy grain movement has led to a good start for ocean vessel traffic in Toledo,” said Joe Cappel, VP of Business Development for the Toledo-Lucas County Port Authority. “We’ve loaded or discharged 17 overseas vessels through the end of June which is our highest total at this point in the season for several years.” Tonnage to date has exceeded 3.5 million short tons with sharp increases in grain and coal leading the way.

According to a new study released this month, cargo shipments to ports on the Great Lakes-St. Lawrence River waterway support 147,500 jobs and generate U.S.$25.6 billion in economic activity in the eight Great Lakes states.