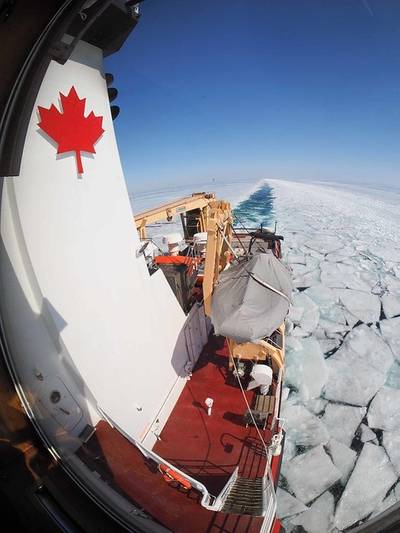 The Great Lakes-St. Lawrence shipping industry is calling for at least five new icebreakers to be part of the federal government’s recent announcement of $15.7 billion for Canadian Coast Guard fleet renewal.

Chamber of Marine Commerce President Bruce Burrows will be in attendance as the Coast Guard dedicates the Captain Molly Kool into service at its home port of St. John’s, Newfoundland and Labrador. The Captain Molly Kool was recently retrofitted to provide services along the East Coast.

However, this asset along with two other acquired icebreakers currently being retrofitted will not be adding any extra capacity but take the place of other vessels that will be out of service for major repairs.

Canadian and U.S. Coast Guard crews worked tirelessly during the Great Lakes spring break-out, but were hampered by the age and condition of the fleets at their disposal. Two U.S. Coast Guard icebreakers were out of service in March and a Canadian icebreaker assigned to Lake Superior was only able to operate at 60 per cent of capability and was idled in April due to mechanical issues.

Ice build-ups in the St. Lawrence River during January also led to eight container ships being stuck at the Port of Montreal and 10 others at other Quebec ports.

In the Great Lakes-St. Lawrence region, the cost to the Canadian economy of a Canadian vessel being delayed impacting cargo delivery is estimated at over $500,000/day.

Overall, ships transport more than 230 million metric tons of goods worth over $100 billion on the Great Lakes-St. Lawrence River waterway, generating more than $60 billion in economic activity and supporting 329,000 jobs in Canada and the U.S.

That economic contribution is only set to increase as ports and their customers invest in increasing the capacity of the waterway as well as looking at options like lengthening the navigation season of the St. Lawrence Seaway.