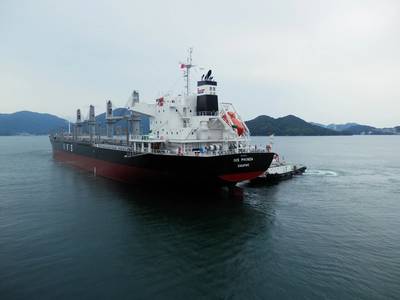 Singapore-based Grindrod Shipping Holdings, a global provider of maritime transportation services in the drybulk and product tanker sectors, announced a number of transactions for the purpose of modernizing its fleet and increasing its financial flexibility and liquidity.

The shipping services company said in a press note that it took delivery of the IVS Phoenix, a Japanese-built eco ultramax drybulk carrier newbuilding on June 3, 2019.

As previously disclosed, the vessel has been chartered-in from its owner for a minimum period of three years with options to extend for up to two additional years, at Grindrod Shipping’s election.

Grindrod Shipping also recently entered into a sale and leaseback transaction with a Japanese shipowner relating to the 2010-built handysize drybulk carrier, IVS Knot, for a cash amount of $13.0 million (before commissions but net of charter pre-payments).

At closing, the sale generated approximately $6.3 million of cash for the Company after settling the debt associated with the vessel.  The transaction closed on June 26, 2019.

Martyn Wade, the Company’s Chief Executive Officer, said: “We are delighted to have recently taken delivery of the IVS Phoenix and concluding the sale and leaseback of the IVS Knot, which represents a new source of funding for the Company."

He added: "The sale and leaseback transaction adds a new dimension to our longstanding relationship and status within the Japanese market and we believe this affords the Company the potential to leverage this further.  Through the IVS Knot and the sale of the joint venture loan Grindrod Shipping has strengthened its liquidity by approximately $13.8 million without divesting control of any core assets.”

The tanker business, which operates under the brand “Unicorn Shipping” includes a fleet of seven medium range tankers and three small tankers (including the Umgeni).