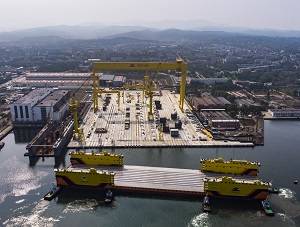 Zvezda obtained its GTT license after a qualification process that began in September 2017, including the construction of a Mark III technology mock-up.

The TALA will allow Zvezda to build ARC7 icebreaking LNG carriers fitted with the GTT membrane storage system. These specialized vessels, used for transporting LNG year round from the Russian Arctic to destinations in Europe and Asia, are currently built at shipyards in South Korea and China.

Russia's second-largest natural gas producer Novatek earlier this year outlined plans to order up to 42 ARC7 LNG carriers. The first 10 will reportedly be built in foreign yards, and the remainder will be built domestically.

Zvezda Shipbuilding Complex has been formed by the Zvezda Far Eastern Shipyard and the Consortium of Rosneftegaz, Rosneft and Gazprombank. The shipyard, which launched its first newbuild in May, plans to specialize in the construction of large-capacity vessels, ice-class ships, special vessels and marine equipment or offshore platforms.