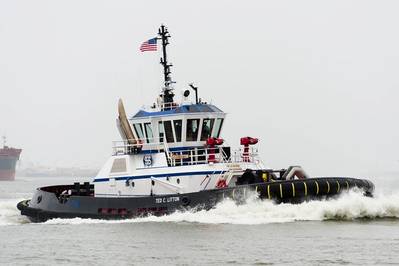 American manufacturer Gulf Island Shipyards has completed the second of 10 Z-Tech 30-80 tugs, five of which were ordered by Suderman & Young Towing Co.

Once completed, these tugs will be operated in ports on the Texas Gulf Coast by G&H Towing Co, said a press release from Robert Allan Ltd.

The Z-Tech 30-80 tug Ted C. Litton evolved from the previous Z-Tech 7500 design for Suderman & Young. Designed and built with a sponsoned hull form, escort capability of the tug is significantly enhanced.

The new Z-Tech series tugs are intended for operation primarily in major ports and marine terminals. It emphasizes the safe and capable operation of ship-handling operations with large ships, particularly those with extreme flares.

Emphasizing the need to work in either a push or pull mode under the flared ends of large container ships and car carriers, the Z-Tech® has a relatively low forward sheer, and a wide, heavily fendered bow.

Customized general layout of the tug represents more than a decade of cooperation by Robert Allan Ltd. naval architects and the owners. The Master and Chief Engineer’s cabin along with galley and mess are located on the main deck while two cabins for four crew members are located on the lower deck.

Main propulsion for the tug comprises a pair of Caterpillar 3516E, EPA Tier 4 certified diesel engines, each rated 3386 BHP at 1800 rpm, and driving a Schottel SRP 510FP Z-drive unit with Ø2800 propeller. The tug is fitted with a Fire Fighting 1 system with two FFS 6200 gpm pumps driven by two Caterpillar engine C18 respectively. Each of the fire pumps have foam proportioner valves to add foam capability to the off ship fire fighting system