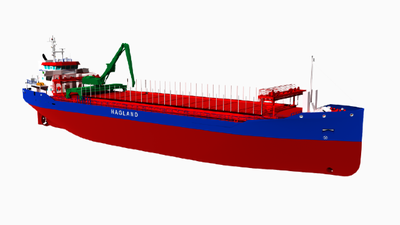 Norwegian shipowner Hagland Shipping said it has ordered two 5,000 DWT self-discharging bulk carriers from Dutch shipyard Royal Bodewes for scheduled delivery in the first half of 2023. Hagland, which has options for two additional vessels, said it will pay about NOK 280 million ($32.9 million) for the initial pair.

The IMO Tier III-compliant newbuilds will be equipped with plug-in battery hybrid solutions enabling zero emissions operations at harbor and significantly reduced emissions during sailing, the shipowner said. Built to replace existing tonnage in Hagland fleet, the new Norwegian-flagged ships will reduce CO2 emission by more than 30% and NOx emissions by 90-95% compared to the company's existing vessels.

The vessels are being built with NOK 26.8 million ($3.1 million) in support from Enova, an agency owned by Norway's Ministry of Climate and Environment that helps fund projects that reduce greenhouse gas emissions. Other financing will come through a combination of equity and bank loan, and the company has also received an offer for long-term financing from Innovation Norway, Hagland said.

Hagland, which aims to achieve greener short sea shipping, said the newbuilds mark "a major step forward" in its fleet renewal strategy and transition to low and zero emissions vessels.

The company is also currently working with Norwegian company NOAH to retrofit its existing vessel Hagland Captain to run on battery hybrid power.