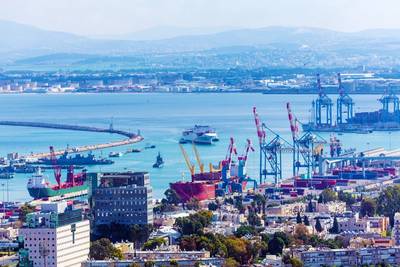 Four investment groups are looking to acquire the Israeli port of Haifa estimated to be valued as high as $600 million with formal bids expected towards October, sources with knowledge of the matter said.

Israel is selling its state-owned ports and building new private docks in an effort to encourage competition and bring down costs. At the same time, warming ties with neighboring Arab countries are creating new trade opportunities and Haifa is well placed to become a regional hub.

A new container terminal run by China's Shanghai International Port Group (SIPG) is opening this year just up the coast and Haifa port will have to be upgraded to compete.

Final offers are expected around October, an official with the Government Companies Authority (GCA), which is handling the sale, told Reuters. A winner should be chosen before the end of the year with ownership transferred at the beginning of 2022.

Contenders come from Israel, Europe, India and the United Arab Emirates, which only last year normalized ties with Israel.

The GCA official said the sale was "an orderly, international process", adding: "geopolitics is not a factor".

To attract investors who may have concerns about competing with the Chinese-run terminal across the bay, Israel is selling Haifa port with a war chest of about 1.9 billion shekels ($590 million), lots of land to develop and growing consumer demand for goods, the GCA official said.
"We plan to make Haifa the gateway to the Middle East," said Shlomi Fogel, co-owner of Israel Shipyards Industries, which is jointly bidding with Dubai’s DP World for the port. "We have all the ingredients to make it happen."

Libra's CEO George Logothetis said the project had "the potential to turn the port into a multi-cargo strategic hub that will massively benefit Israel and the wider region".

India’s Adani Ports is separately partnering with Israel's Gadot Group, and a fourth suitor includes Israel's Shafir Engineering, industry sources said.
Shafir and Gadot declined to comment, while officials at Adani did not immediately respond to a request for comment.