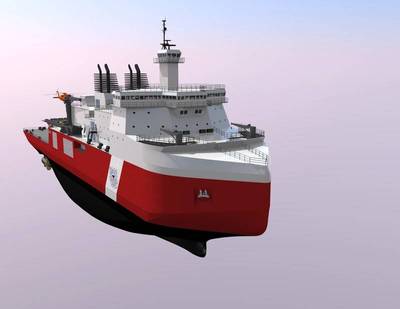 The $552.7 million detail design and construction contract follows a $745.9 million contract awarded in 2019 to build the first PSC. There is also an option for a third PSC.

The Polar Security Cutter program is planned to replace the Coast Guard's existing fleet of icebreakers. The new fleet will allow the USCG to perform missions in the Arctic region, including defense and readiness operations, research assignments, search, rescue and logistic support and vessel escort.

Halter Marine is teamed with Technology Associates, Inc., (TAI), as the ship designer. The design of the new PSC is based on that of the German polar research and supply icebreaker Polarstern II. The vessels have an overall length of 460 feet and an overall beam of 88 feet. Each will have a full load displacement of approximately 22,000 long tons. The propulsion will be diesel electric at over 45,200 horsepower, making it capable of breaking ice between six and eight feet thick. The icebreaker will accommodate 186 personnel comfortably for an extended endurance of 90 days.

In addition to TAI, Halter Marine has teamed with ABB for its Azipod propulsion and Trident Marine for its power distribution system, Raytheon for command and control systems integration, Caterpillar for the main engines, Jamestown Metal Marine for joiner package, and Bronswerk Marine for the HVAC system.

“By building the second Polar Security Cutter, Halter Marine will continue its mission in delivering a national priority to the United States Coast Guard. Our talented workforce here at Halter Marine is proud to be part of such an important endeavor,” said Bob Merchent, president and CEO of Halter Marine.

Construction on the first PSC kicked off this year with delivery planned for 2024. Work on the second vessel is expected to be completed by September 2026.