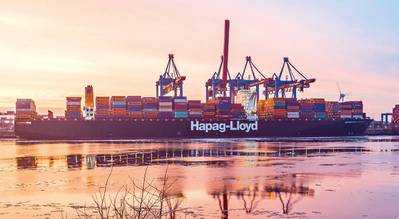 Hapag-Lloyd and the Shenzhen Port Green Convention have entered into an agreement to cut back on sulphur oxide while the company's vessels are docked at port.

"By joining the Shenzhen Port Green Convention, Hapag-Lloyd has demonstrated its commitment to environment," says Hapag-Lloyd’s Chief Operating Officer Anthony J. Firmin.
Under the agreement, Hapag-Lloyd has voluntarily undertaken only to use fuel with a sulphur content of less than 0.5% while its ships are docked at the terminal. In doing so, Hapag-Lloyd is increasing its existing efforts to improve air quality in port cities.
Hapag-Lloyd has taken part in various voluntary environmental programs that promote the use of low-emission fuels during idle periods. These included, in the past, for example, the "At Berth Clean Fuels Program" in Seattle, the "Port Metro Vancouver Blue Circle Award" and the "Fair Winds Charter" program in Hong Kong.
Also off the ports, Hapag-Lloyd responsibility for improving air quality seriously. Thus, the fleet operates in sea areas outside of emission control areas (Emission Control Area ECA) with fuel with a sulfur content are on average only 2.1 percent. Hapag-Lloyd is well below the prescribed limit of the International Maritime Organization (IMO) from the current 3.5 percent. Within the ECA use Hapag-Lloyd ships as prescribed only fuels with a maximum sulfur content of 0.1 percent.