This Day In Naval History: June 13 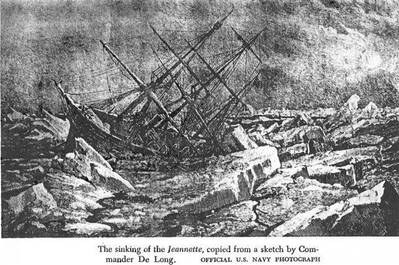 Sketch by LCDR. DeLong of Jeannette stuck and sinking in the ice in June 1881. US Navy image

1881 - The bark-rigged wooden steamship Jeannette sinks after she is crushed in an Arctic ice pack during the expedition to reach the North Pole through the Bering Strait. Only 13 of her crew survive out of 33.

1900 - During the Boxer Rebellion, the International Relief Expedition turns back near Anting, China, and moves to Sanstun after the Tientsin-Peking railroad is cut by the Boxers, whose anti-foreign mantra grew to burning homes and killing foreigners as well as Chinese Christians. In total, 56 Marines and Sailors receive the Medal of Honor for their actions during the Rebellion.
1913 - Lt. j.g. P.N.L. Bellinger sets an American altitude record for seaplanes when he reaches 6,200 feet in a Curtiss (A 3) aircraft.
1939 - USS Saratoga (CV 3) and USS Kanawha (AO 1) complete a two-day underway refueling test off the coast of southern Calif., demonstrating the feasibility of refueling carriers at sea where bases are not available.
1943 - USS Frazier (DD 607) sinks Japanese submarine (I 9), east of Sirius Point, Kiska, Aleutian Islands.
1944 - USS Melvin (DD 680) sinks Japanese submarine (RO 36) between 50 and 75 miles east of Saipan. Also on this date USS Barb (SS 220) sinks Japanese army transport Takashima Maru in the Sea of Okhotsk and survives counter-attacks by destroyer Hatsuharu.
1992 - USS Maryland (SSBN 738) is commissioned at New London, Conn. Two days later, the 13th out of 18 Ohio-class ballistic missile submarines sails with her Gold Crew to her homeport at Naval Submarine Base, Kings Bay, Ga.
(Source: Naval History and Heritage Command, Communication and Outreach Division)