This Day In Naval History: July 25 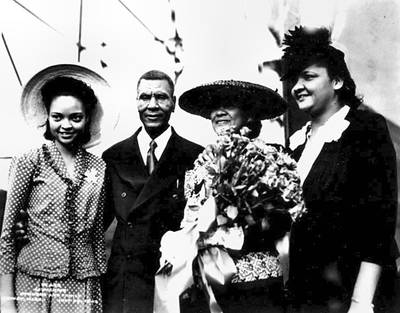 Ship's Sponsor, Naunita Harmon Carroll, and her party at the Fore River Shipyard during the USS Harmon (DE 678) launching ceremonies in Quincy, Mass. on July 25, 1943. (U.S. Navy photo from the Naval History and Heritage Command)

1943 - The first Navy ship named for an African-American, USS Harmon (DE 678), is launched. USS Harmon is named in honor of Mess Attendant 1st Class Leonard Roy Harmon who posthumously receives the Navy Cross for heroic actions trying to save a shipmate on board USS San Francisco (CA 38) during the Naval Battle of Guadalcanal on Nov. 13, 1942.

1946 - The second of two nuclear weapon tests - BAKER - is detonated during Operation Crossroads at Bikini Atoll, Marshall Islands. The first test was ABLE.

1956 - USS Edward H. Allen (DE 531) and USNS Private H. Thomas (AP 185) rescue more than 200 passengers from Andrea Doria and transport them to New York after the Italian liner collides with Swedish cruiser Stockholm off Nantucket on the New England coast. Forty-six people died from the collision, but 1,600 passengers and crew are saved.

1998 - USS Harry S. Truman (CVN 75) is commissioned at its homeport of Norfolk Naval Base, Va. The eighth aircraft carrier of the Nimitz-class is the first to be named after the 33rd president of the United States.