Hull Damage Not to Blame for 1994 Estonia Ferry Disaster -Report 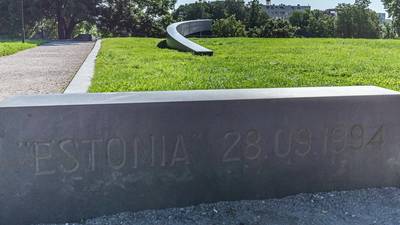 An Estonian ferry disaster that killed 852 people in 1994 was probably not caused by hull damage to the vessel that was first revealed in a documentary this year, experts concluded after a preliminary investigation of the video footage.

The sinking of the ferry Estonia in the Baltic Sea was the deadliest peacetime shipwreck in European waters for centuries. An official investigation in 1997 concluded that the bow ramp of the ferry had failed during a storm, flooding the car deck and causing the vessel to roll over and sink.

The documentary, which aired on the Discovery Network in September included new underwater video images from the wreck site, showing previously undisclosed damage to the starboard side of the ferry.

That prompted Estonia's government to propose to Finland and Sweden that the investigation be reopened to try to determine whether the damage contributed to the sinking.

However, a preliminary examination report published on the Estonian government website concluded that the newly discovered damage was too small to have sunk the ship as quickly as it did. The hole probably appeared as the sinking ship hit rocks on sea bottom, it added.

"The findings cannot change the conclusions" of the earlier investigation, said the new preliminary report, authored by four Estonian scientists and a senior adviser at Foreign Affairs Ministry.

The authors were shown the footage by the production company before the documentary was aired, but their report was published only this week. An Estonian government spokesman said the report was being released in the interest of transparency, and Estonia still wants the new investigation.

The Estonian-registered vessel lies in shallow Finnish territorial waters. Most of those killed were Swedes.