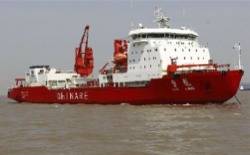 China's icebreaker Xuelong, or "Snow Dragon", returned to its Shanghai base after completing the country's 28th Antarctic expedition.

During the expedition, Xuelong delivered supplies to the country's Antarctic stations, and scientists aboard conducted various scientific research tasks, including polar environmental survey and the installation of an Antarctica survey telescope.

China's second icebreaker is scheduled to be put into use in 2014 to better conduct polar researches alongside the current icebreaker Xuelong. Concept design of the new icebreaker has been completed and the program is going smoothly, said Weng Lixin, deputy director of the polar research office at the State Oceanic Administration (SOA).

The new  icebreaker will be capable of breaking ice up to 1.5 meters thick, in comparison with the 1.2-meter icebreaking capacity of Xuelong, an A-2 class icebreaker, according to Weng.