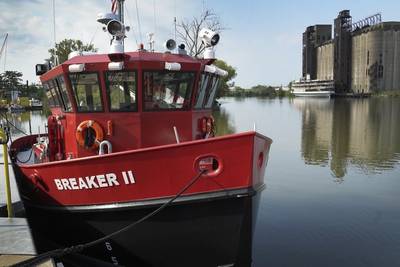 A new icebreaking tugboat built by Blount Boats in Rhode Island has been delivered to the New York Power Authority (NYPA) to work in the Niagara River to help alleviate shoreline flooding and reduce the likelihood of ice limiting the power production at large hydro plants along the Niagara River. The Breaker II joins a fleet of three boats that work every winter to install the Lake Erie—Niagara River Ice Boom—a series of 22 spans of steel pontoons that straddle the mouth of the Niagara River and work to prevent large ice formations from traveling up river.

The Breaker II was custom designed by the Bristol Harbor Group, Inc. for the NYPA for the unique role that it will play in controlling ice buildup in the Niagara River. In August, the boat traveled from the Blount shipyard, through the New York State Canal System and recently arrived at its permanent Buffalo home.

The Breaker II's primary job will be to install and remove the Niagara Ice boom, but in consideration of the harsh winter conditions in which it works, it has a bow made with high grade steel for ice breaking capability. Together with the ice boom, the boat will help to diminish the probability of large-scale ice blockages in the river which can cause flooding, damage to docks and shore structures on the Niagara River and reductions of flow to the hydro-electric power plant intakes.

Gil C. Quiniones, NYPA President and CEO, said, "With special features that are especially designed for the unique and dangerous work of the icebreaker tug, we are confident this versatile boat will make the work easier on our crews."

The ability to generate hydropower is dependent on keeping the Niagara River running. During the winter months when sub-zero temperatures produce an ice cover on Lake Erie, keeping the river running can be challenging. Winter winds on Lake Erie frequently push chunks of ice into the upper Niagara River where they flow downstream and tend to jam and can obstruct water intakes for the region's hydroelectric projects. To maintain river flows, NYPA and Ontario Power Generation (OPG) conduct a carefully coordinated ice management operation that includes regular icebreaker patrols, continual surveillance of river conditions and the use of the Lake Erie-Niagara River Ice Boom. The cost of the vessel is shared by NYPA and OPG.

John R. Koelmel, NYPA Chairman, said, "The Breaker II has important work before her, to keep the river flowing so that NYPA can facilitate clean power production. This little boat has a big job and we, at NYPA, are very pleased to have her join our fleet."

"The Breaker II tugboat will play a vital role in generating power and mitigating the impacts of shoreline flooding along the Niagara River," said New York Governor Andrew Cuomo. "In just a few short months, this boat will help install the region's iconic ice boom, which will help prevent large ice flows from inhibiting the generation of clean hydro electricity to power our state, and limit ice build-ups that can cause shoreline flooding."

"It's been a tough couple of years for our waterfront communities with flooding last year and the impact of COVID-19 this year," said Lieutenant Governor Kathy Hochul. "We are committed to finding smart solutions to help mitigate flooding and help our shoreline communities build back better. The new Breaker II tugboat will be used for ice-cutting operations in the Niagara River to keep the river free from ice and prevent ice jams and flooding. This is part of our overall efforts to prepare for future high-water events and help to ensure our communities have the resources they need to be more resilient and sustainable in the future."