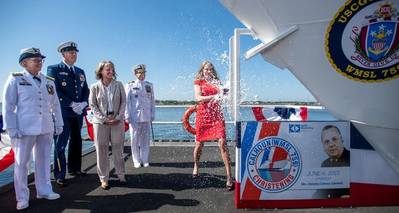 Christina Calhoun Zubowicz, ship sponsor and granddaughter of the namesake, christened the ship by breaking a bottle of sparkling wine across the bow.- Credt: HII

Calhoun (WMSL 759) is named to honor Charles L. Calhoun, the first master chief petty officer of the U.S. Coast Guard. Calhoun served in the U.S. Navy for three years during World War II and was honorably discharged in 1946 as a torpedoman second class. He enlisted in the Coast Guard that same year and held varying positions of leadership over the course of his career.

“Today’s christening is an acknowledgment of an important and valued partnership between our shipyard and the United States Coast Guard,” Ingalls Shipbuilding President Kari Wilkinson said. “We consider it a privilege to build these magnificent ships and as shipbuilders, we are humbled to further Master Chief Calhoun’s legacy.”

The keynote speaker was commandant of the U.S. Coast Guard Adm. Linda Fagan, who was recently appointed to lead the Coast Guard and is the armed forces’ first female service chief.

“I’m super proud of the Ingalls team, I know how much heart and soul goes into building a ship like this,” Fagan said. “These national security cutters are absolutely vital to our national security and economic prosperity. We are a global coast guard, forward deployed — conducting exercises with maritime forces, strengthening security partnerships and maritime governance in critical parts of the world right now.”

Christina Calhoun Zubowicz, ship sponsor and granddaughter of the namesake, christened the ship by breaking a bottle of sparkling wine across the bow. 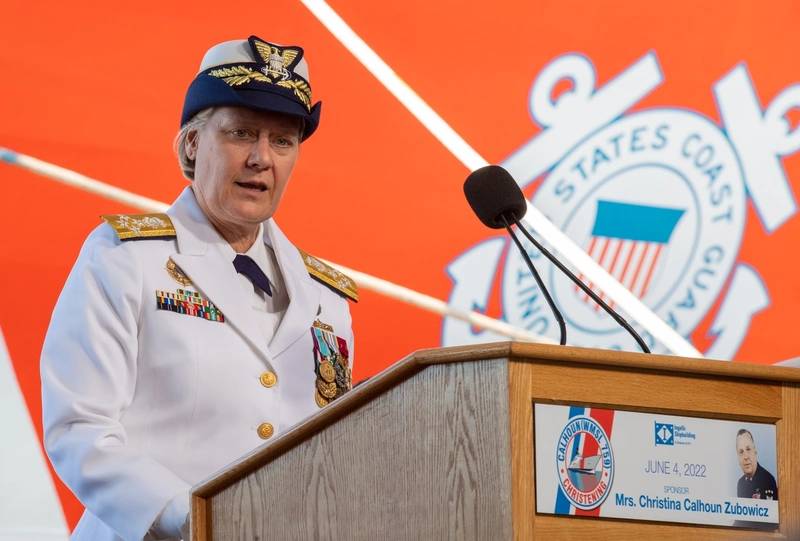 “On behalf of the Calhoun family, I would like to extend our sincere appreciation for the tremendous work being done here at Ingalls Shipbuilding,” Zubowicz said. “Rest assured that my grandfather would be admiring this ship with great pride today knowing that his name would continue his life’s work of carrying out Coast Guard missions.”

“The national security cutters coming out of Ingalls are contributing greatly to our national security, stemming the flow of drugs throughout our oceans, and proving that we have the best shipbuilders right here in south Mississippi,” Palazzo said. “Congratulations to everyone at Ingalls on another successful christening, and I look forward to seeing the Calhoun (WMSL 759) in action.”

Ingalls Shipbuilding is the sole designer and provider of the Coast Guard Legend-class national security cutter.