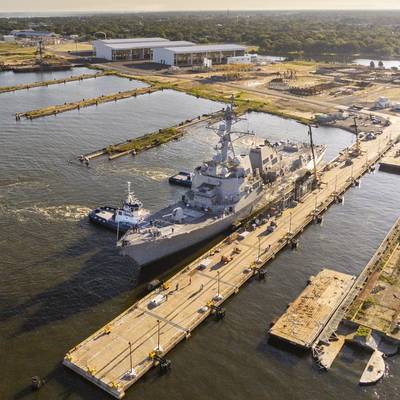 U.S. Navy destroyer Delbert D. Black (DDG 119) was moved to Pier Four on the east bank of the Pascagoula River, signifying the reopening of Ingalls' facility that had been decimated in 2005 by Hurricane Katrina. (Photo by Derek Fountain/HII)

Ingalls Shipbuilding has reopened its rebuilt and modernized facility on the east bank of the Pascagoula River after much of the site was destroyed by Hurricane Katrina in 2005.

Ingalls, a division of Virginia-based naval shipbuilding giant Huntington Ingalls Industries, had shifted all of its activities to its yard on the river's west bank after Katrina's storm surge ravaged most of the east bank site nearly 15 years ago. The only operations that remained on the east bank post-Katrina included one warehouse and minor shop work until those operations could be relocated to the west bank in 2008.

Delivered to the U.S. Navy in April, Delbert D. Black, itself repaired after suffering a bit of damage while still under construction in March 2019, will remain on the east bank with its crew until the ship’s sail-away later this year.

Several areas of the modernized east bank facility had been in operation prior to Delbert D. Black moving to Pier Four, including the integrated products department and covered unit construction buildings, which were made operational last month, a shipyard spokesperson told MarineLink.

In rebuilding the site, Ingalls was able to salvage and use many historical features from original east bank facilities, including all of the bricks from a 1930s guard house as well as a concrete slab containing initials carved by the yard's founder, Robert Ingalls Sr.

In addition, the reactivation project saw more than 100,000 tons of concrete cleared and reused to construct a road base on the east bank. All interior and exterior lighting on the east bank now use LED technology.

“This restoration and modernization project demonstrates our commitment to continuously enhancing our shipbuilding facilities to increase capability and ensure future growth,” said Ingalls Shipbuilding President Brian Cuccias. “We are proud to see more of our workforce, and our customers, moving back into the heart of the city of Pascagoula.”

“In reopening the east bank, we celebrate the 80-plus year legacy of those Ingalls shipbuilders who came before us, and look forward to continuing Ingalls’ legacy of building the finest ships in the world for decades to come,” Cuccias said.