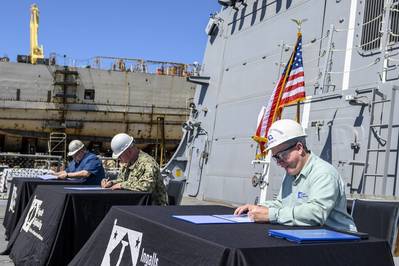 Documents signed today mark the official transfer of custody of the ship from HII to the Navy. Delbert D. Black is scheduled to sail away from the Pascagoula, Miss. shipyard in August 2020.

DDG 119 is the first ship named in honor of Navy veteran Delbert D. Black, who served as a gunner’s mate and was aboard the battleship USS Maryland (BB 46) during the attack on Pearl Harbor, Hawaii.

“We are proud to deliver our 32nd state-of-the-art destroyer to the Navy,” Ingalls Shipbuilding President Brian Cuccias said. “Our workforce plays a critical role in protecting those who serve our nation. We continue to fulfill our mission as shipbuilders by building highly capable warships that meet and exceed the needs of our military partners.”

Arleigh Burke-class destroyers are highly capable, multi-mission ships and can conduct a variety of operations, from peacetime presence and crisis management to sea control and power projection, all in support of the United States military strategy. Guided missile destroyers are capable of simultaneously fighting air, surface and subsurface battles. The ship contains myriad offensive and defensive weapons designed to support maritime defense needs well into the 21st century.