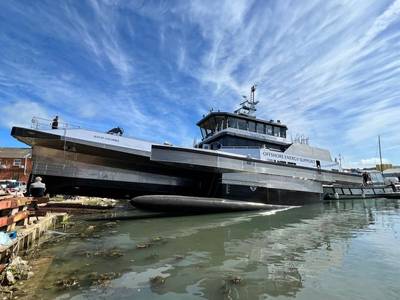 The multihull newbuild, Seacat Columbia, is the first BARTech30 CTV designed by BAR Technologies in partnership with Chartwell Marine. The 30-meter-long features BAR Technologies' FOSS (foil optimized stability system), which enhances seakeeping and reduces fuel usage and emissions, according to the designer.

Following the launch, the build schedule will be put on hold so that the vessel can be put on display at the Seawork trade show in Southampton, U.K. later this month.

Seacat Columbia is the first of two BARTech 30 CTVs being built at Diverse Marine for Seacat Services. The second vessel will be named Seacat Cambria.

The BARTech 30 design has been granted approval in principle (AIP) from the American Bureau of Shipping (ABS).

Related: How Racing Tech Will Set Up US Offshore Vessel Operators for Success