Inside the LNG Shipbuilding Boom 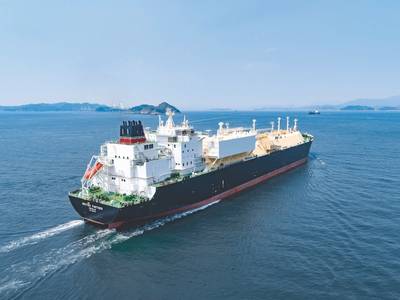 BP Shipping took delivery of British Partner, the first of a half dozen new 173,400 cu. m. capacity liquefied natural gas (LNG) carriers to be delivered through 2018 and 2019 from the DSME shipyard in South Korea. (Photo: BP Shipping)

South Korean shipyards have seemingly boxed out rivals from the market for building large ships carrying liquefied natural gas (LNG), winning all of the orders for the next three years worth more than $9 billion.

Three South Korean yards - Daewoo Shipbuilding & Marine Engineering (DSME), Hyundai Heavy Industries and Samsung Heavy Industries - have won the more than 50 orders placed for new large-scale LNG tankers for delivery in the next three years, according to data from the companies and two tanker brokers.

The bulging orderbook is also sign of how the companies have rebounded from a sector-wide slump only two years ago and how they are positioned to command the sector in the future.

"The demand for LNG carriers surged followed by increased global demand of LNG," said Park Hyung-gun, vice president of DSME. "There is a bright outlook ahead for LNG demand and South Korean shipbuilders will be able to excel in the LNG market."

A set of data collected by another ship broker, who did not want to be identified, showed all of this year's orders for large LNG tankers went to South Korea, at a combined value of over $9 billion.

The new ships will increase the global LNG fleet by around 10 percent. Dominating this segment is key for shipyards, as gas consumption outgrows that of other fuels such as oil or coal.

Virtually all the LNG from new projects in the Russian Arctic, Papua New Guinea, Australia, the United States, East Africa or Qatar will be delivered on South Korean ships made near the cities of Busan and Ulsan on the country's southern coast.

DSME said it has received 12 orders for LNG tankers this year. Those orders are worth about $2.2 billion to the company, according to data from Daiwa Capital Markets.

LNG tanker orders this year have made up over half its business, DSME said, helping it recover from a near collapse in 2016/17, when its stocks were suspended amid one of the deepest shipping industry downturns on record.

An official at Samsung Heavy, who did not wish to be identified, said "market conditions are improving" and the firm has received 11 LNG tanker orders this year, around 40 percent of its total book.

Hyundai Heavy, which had its worst year ever in 2016, said LNG ship orders started rising in 2017.

This year, they will account for 21 percent of its new orders between January and September, up from 14 percent over the same period in 2017, company data showed.

Two-thirds of the global LNG vessels in service today were built in South Korea, according to Braemar, versus 22 percent from Japan, 7 percent from China, and the rest made in France, Spain and the United States.

South Korea's edge comes from its technological and service standards as well as investment into research and development.

DSME developed the world's first ice-breaking LNG tankers and the company will deliver the eighth such ship, the Georgiy Brusilov, to Russia's Arctic LNG producer Novatek this month. Another six are under construction.

Price is also a factor in South Korea's success, with the country's shipyards building LNG carriers for as low as $175 million, according to data from Daiwa.

Further cementing South Korea's grip, the LNG industry has shifted away from the Moss tanker design, identified by the four or five spherical tanks holding the fuel and named for the company that designed them in 1973.

Instead, customers are demanding Membrane-type vessels that leave less dead space within the ship's hull. This efficiency allows a Q-Max vessel, the largest class of Membrane carrier, to load up to 260,000 cubic metres of LNG versus 182,000 cubic metres on the biggest Moss-type tanker.

Braemar estimates 71 percent of the global LNG tanker fleet is made up of Membrane carriers, versus 22 percent Moss tankers, and 7 percent using other systems.

This year, 93 large LNG carriers using the Membrane design were ordered versus only eight Moss style, according to Braemar.

Japan contends, however, that South Korea began unfairly supporting the shipyards during the 2016 downturn, when the South Korean government paid out subsidies and gave credit to keep the companies alive and their hundreds of thousands of workers employed.

The country plans to file a complaint over the issue with the World Trade Organization (WTO), Japan's Nikkei paper reported this month.

Whoever dominates this market is set to reap large benefits.

Global LNG demand is surging from new users in emerging markets and because of a huge gasification program in China.

The fuel is set to become important for marine transport as the International Maritime Organization (IMO) will require shippers to use cleaner fuels from 2020.

The rising thirst is being met by new production projects, especially in North America and Australia, which will require more ships to transport LNG to its customers.

Korea's shippers are confident they will be the ones to ship most of this gas.

"I see the current cycle lasting for at least 10 years and South Korea is expected to keep dominating the LNG market. Rival countries can't catch up in the short term given their engineering skills and proficiency," said Hana Financial's Park.