Nippon Yusen Kabushiki Kaisha (NYK), MTI Co., Ltd. (MTI) and Elomatic have completed the development of a concept design for an ammonia-fuel ready LNG-fueled vessel (ARLFV) for the transition to a future marine fuel.

As the maritime world digests a raft of new legislation leading toward decarbonization, a main concern is the ability to leverage the full value of ships built today in a fast evolving environment. In short, flexibility in design, particularly when it comes to fuel flexibility, is paramount to ensure that ships are able to serve for the entirety of their projected lifespan, offering shipowners an adequate return on investment.

To this end, NYK and MTI  established the long-term target of net-zero emissions of greenhouse gas (GHG) by 2050 for the NYK Group's oceangoing businesses. In turn, NYK Group has been expanding its fleet of LNG-fueled ships, recognized as a bridge solution to vessels propelled by future marine fuels, such as ammonia or hydrogen.

In this project, which started in September 2021, NYK Group and Elomatic started the development of a concept design for an ARLFV that can efficiently be converted from an LNG-fueled vessel to an ammonia-fueled vessel, based on the assumption that ammonia will become a next-generation marine fuel.

A concept design considers the specifications of a ship from an operation aspect, including factors such as load capacity, voyage distance, ship speed, fuel capacity, etc. When an ARLFV is ordered from a shipbuilder in the future, this concept design can then be used.

During Phase 1 from September 2021 to the end of February 2022, the organizations designed an ARLFV to perform the functions of a pure car carrier and a post-panamax bulker, mainly addressing these issues:

During Phase 1.5, which will continue until June 2022, the team will design a similar concept for a capesize bulk carrier and a very large crude oil carrier. Until the end of 2022 in Phase 2, the team will proceed with the actual design of an ARLFV with a shipyard and marine manufacturers, reflecting the results obtained in the concept design, such as the optimal fuel-tank layout, ammonia-fuel supply device, and structural strength of the hull.

This project will be completed when the actual ship design is completed, and the plan is to be in a shipbuilding contract in 2023, with a complete building of the first ARLFVs by 2025. 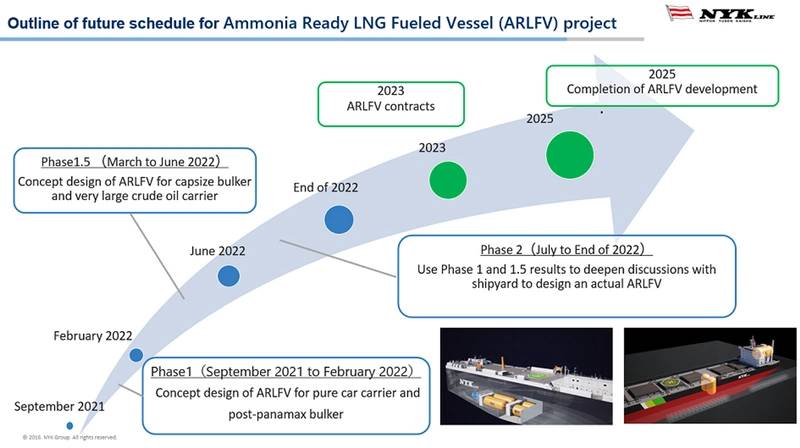