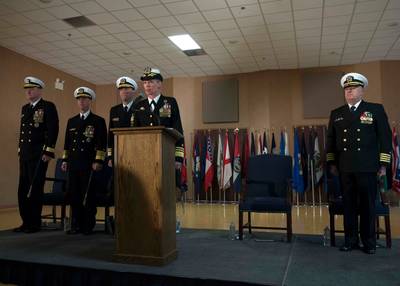 The ceremony included the presentation of colors by the U.S. Navy Ceremonial Guard color guard, national anthem by the U.S. Navy Band and remarks from guest speaker, Chief of Naval Operations Adm. John Richardson.
"While here, I've witnessed firsthand the tremendous dedication of our civilians and Sailors who support the fleet, warfighters and their families," said Smith. "It has been one of the greatest honors of my life to serve the Navy as commander, Navy Installations Command."
Smith served as the head of the Navy's entire shore infrastructure for approximately two and a half years and was the fifth commander of CNIC since the command's inception in 2003.
CNIC, also known as the Navy's Shore Enterprise, includes 11 regions, 71 installations and 912 special areas, which include transmitter sites, missile ranges, schools, naval magazines, and fuel storage sites on nearly 1 million acres of land. The Shore Enterprise is staffed by approximately 53,000 military and civilian personnel around the world.
Richardson commended Smith for his dedicated service while serving as commander of Navy Installations Command.
"I take tremendous pride in the exceptional job Smith has done as CNIC," said Richardson. "I asked him to stay in the Navy and serve on my staff as deputy chief of naval operations for fleet readiness and logistics, because his personal initiative goes beyond the call of duty and his leadership is above reproach."
Smith, a native of Green's Farm, Connecticut, received his commission from the U.S. Naval Academy in 1983 and was designated a surface warrior officer in 1985. Smith's career includes service aboard five surface combatants and five shore assignments, including serving as deputy executive assistant to Commander in Chief, Allied Forces, Southern Europe/Commander in Chief, U.S. Naval Forces, Europe, with additional support to the Joint Forces Commander, Operation Allied Force and Commander, Joint Task Force Noble Anvil during NATO's operations in Kosovo.
He also served at the U.S. Naval Academy as 4th Battalion officer and Plebe Summer officer in charge. His previous command tours include the guided-missile destroyer USS The Sullivans (DDG 68), Naval Base San Diego, Navy Region Hawaii, Naval Surface Group Middle Pacific, Navy Region Southwest and Navy Region Mid-Atlantic.
"It's important to understand our CNIC mission," said Smith. "We deliver shore-based products and services to sustain the fleet, enable the fighter and support the family. This effort directly contributes to Admiral Richardson's vision for maintaining maritime superiority."
Smith welcomed Jackson as the incoming commander, who becomes the sixth to take charge of Navy Installations Command since it was established in 2003. Jackson offered she is delighted to be in Washington as the new CNIC.
"I am humbled to represent the dedicated professionals of Navy Installations Command. What we do affects the lives of so many military personnel, civilian employees, retirees, and their families around the world," Jackson said. "It will be a privilege and an honor to continue to serve."
Jackson is a native of Wimberley, Texas. She received her commission from the Naval Academy in 1988, and was designated a surface warfare officer in 1989. Jackson holds a graduate degree from George Washington University in engineering management, and is qualified as a joint specialty officer.
Her career includes service aboard five surface combatants and various shore assignments. Jackson commanded USS McFaul (DDG 74) and Naval Station Norfolk. Most recently, she served as Commander, Navy Region Southeast, headquartered in Jacksonville, Florida, prior to taking command of Navy Installations Command.
Navy Installations Command is responsible for the Navy's operations, maintenance and quality of life programs that support the Navy's fleet, Sailors, and their families.