Port of LA's TracPac RMG Cranes to be Integrated by Kalmar 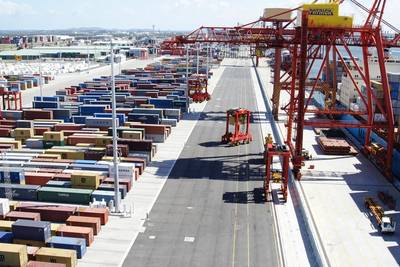 Kalmar, part of Cargotec, has been awarded a contract for the integration of the controls for the new rail mounted gantry (RMG) cranes at the intermodal yard of TraPac Inc's terminal at the Port of Los Angeles.

Kalmar explain that the RMGs will be supplied to TraPac by PACECO with the Kalmar Terminal Logistic System (TLS) ensuring they are integrated in the automated operations. TLS is part of the Kalmar SmartPort equipment automation portfolio.

The intermodal yard is a substantial part of the terminal, with 30 percent of the TEUs shipped inland by rail. To ensure that the containers can be scanned for radiation before they leave the yard by train, TraPac and Kalmar designed a conveyor solution to facilitate the movement of containers through the radiation scanner prior to being loaded on the rail cars.

As part of the process, a Kalmar automated straddle carrier loads a container on the conveyor to allow for scanning, after which it takes the container to the train or an inspection area depending on the result of the scan. The conveyor is designed and delivered by Kalmar, with the automated controls being part of Kalmar SmartPort.

The manufacturers add that the Kalmar Terminal Logistic System is a flexible, equipment independent automation platform capable of supporting different types of equipment. At TraPac the system will integrate the automated stacking cranes (ASC), the automated straddle carrier operations, the RMGs and the conveyor in the intermodal yard. Kalmar acts as the system integrator of the terminal, providing a single integrated terminal automation system.

Jorma Tirkkonen, Senior Vice President, Automation at Kalmar: "The fact that we are able to support various types of equipment, both built by Kalmar and third parties, is a demonstration of the sound architecture of our automation solutions."