Hurricane Arthur Intensifies as it Heads for Land 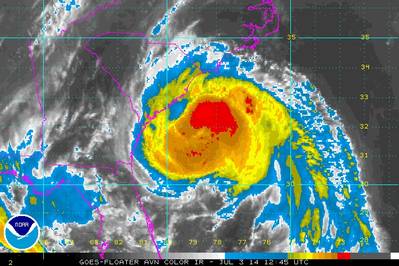 The first hurricane of the Atlantic season gained strength on Thursday is expected to attain Category 2 status as it reaches the North Carolina coast, where thousands of vacationers scrubbed their July Fourth holiday plans amid evacuation orders.

Moving faster at 10 mph (17 kph), the center of the storm was now expected to brush close to the North Carolina Outer Banks late Thursday and early Friday with winds reaching up to 105 mph (170 kph), according to the U.S. National Hurricane Center in Miami.

Arthur would be the first hurricane to hit the U.S. since Superstorm Sandy devastated New York and New Jersey in October 2012 and caused $70 billion estimated damage.

After passing over the Outer Banks, Arthur should accelerate toward the northeast and remain offshore on Friday as it diminishes in strength, posing no serious risk to the northeastern United States, forecasters said.

"The worst of Arthur's wind will remain offshore, but some strong, gusty squalls will affect the North Carolina barrier islands," said Dan Kottlowski, a hurricane expert at AccuWeather.

The storm disrupted plans for holiday beachgoers and others ordered off low-lying barrier islands in the storm's path. Tourists and some residents packed ferries and crowded the only highway off Ocracoke and Hatteras islands, where voluntary and mandatory evacuations were in effect in anticipation of worsening weather conditions.

"Pre-storm jitters and preparation," Dare County Commissioner Allen Burrus said of the mood early on Thursday. "Right now it is beautiful, but it is going to deteriorate around 5 or 6 this afternoon."

Some locals said they would ride out the storm. Retiree Gerry Lebing, who owns a home in Waves on Hatteras Island, said he was tying things down at his house and moving cars to higher ground to avoid damage from the potential storm surge.

While the worst of Arthur's winds were expected to remain offshore, the storm could bring life-threatening rip currents and a storm surge of up to 4 feet (1.2 meters) to North Carolina's barrier islands, forecasters said.

North Carolina officials warned that the narrow 50-mile Highway 12 connecting Hatteras Island to the mainland could become impassable due to storm surge. The state was putting extra heavy equipment in place to remove sand and the overwash as soon as possible after the storm passes.

Part of the highway was cut by storm surge for two months after Sandy, forcing residents to use ferries to reach the mainland.

Officials asked residents to stay out of rough waters and to avoid driving through high water.

"Don't put your stupid hat on," North Carolina Governor Pat McCrory told a press conference. "We anticipate a beautiful holiday weekend after Hurricane Arthur is out of North Carolina."

State officials said 105 National Guard members have been deployed to help with storm preparation and safety, and 400 state troopers are assisting with the evacuation efforts.

Farther up the coast, the resort town of Ocean City, Maryland, moved its July Fourth fireworks display to Saturday because of the storm.

Boston officials also moved up to Thursday a nationally televised concert by the Boston Pops and a fireworks display, which draw hundreds of thousands of spectators to the city's riverfront.