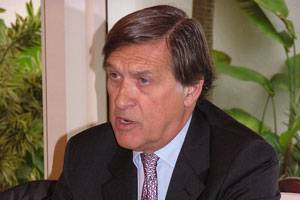 InterManager, the international trade association for in‐house and third party ship managers, has appointed Roberto Giorgi as its new President with immediate effect.

Mr Giorgi, who was elected unopposed at the Nov. 17 InterManager AGM in Singapore, succeeds Ole Stene, Managing Director of Aboitiz Jebsen Bulk Transport Corporation, who has completed his two‐year appointment in the role.

The appointment of Mr Giorgi is a significant and positive move in the growth of InterManager. As President of V.Ships, the world’s largest ship management company, Roberto Giorgi has the necessary experience and industry respect to drive the association to even greater heights.

InterManager now has a membership of 73 – both full and associate members – representing a worldwide fleet of some 2,500 vessels and more than 100,000 crew. Welcoming his election as President, Roberto Giorgi said: “Taking the helm of InterManager at a time when the industry is changing radically will be both a great challenge and a great honour.”

Mr. Giorgi has kicked off his InterManager Presidency by immediately urging ship owners to place training at the top of their manning agendas, despite having to deal with the effects of the credit crunch on the global shipping industry. He highlighted his initial key objectives as President by pledging that he intends to:
• Ensure he represents the views of both owner‐managers and third party managers throughout the global shipping industry
• Protect the welfare and well‐being of seafarers, particularly by addressing the issue of criminalisation and by encouraging consistently high standards for training within the industry
• Uphold the values of the new InterManager KPI system to make sure they are adopted fully by the entire industry

Monaco‐based Roberto Giorgi has a wide breadth of knowledge of the shipping industry. He has been with the V.Ships/Vlasov Group since 1980 and has occupied various positions. His first shore‐based position was in 1980 when he was working for Amarline, a joint venture between the Vlasov Group and a Saudi Company.

From 1984 to 1988 he became Marketing Manager for V.Ships and from 1988 to 1994 he took up the position of Managing Director of V.Ships New York. In 1994 he returned to Europe to run the ship management operation of the Monaco office and started the new brand, V.Ships Leisure, in the cruise sector.

In 2003, he was also appointed Chief Executive Officer of V.Ships Ship Management Division, becoming President of V.Ships in March 2005.

Prior to joining the V.Ships Group, Mr Giorgi attended the San Giorgio Nautical College in Genoa (1964 – 1969) and sailed from Deck Cadet to First Officer with Navigazione Alta Italia, Italian line and Sitmar Cruises. Before joining the merchant marine, he spent one year (1970/71) in the Naval Academy of Leghorn and sailed with the Italian Navy as Lieutenant.