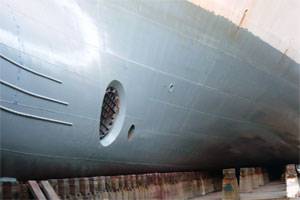 The conversion process began in 2005 with the application of Intersleek 700, a silicone based foul release system, on the 32,700 GT, 23 knot cruise ferry Majestic. Since then another four vessels, the Fantastic, Splendid, Excellent and Excelsior have all been coated with Intersleek 700.

In January 2009, after 40 months service in one of the world’s most severe fouling environments, the Majestic drydocked in Ente Bacini Shipyard, Genoa. The hull was described as being in excellent condition, smooth, glossy and with minimal mechanical damage. Only 30 litres of Intersleek was required for touch-up on the bow before the vessel returned to service.

Mr Bruno Dionisi, GNV Technical Consultant, commenting on the performance of Intersleek on the Majestic said, “On average this product provides undisputed advantages which, in our case, are represented by a bunker saving of around 6 - 7%, a significant reduction in time spent in dry dock and hull washing costs and, most of all, an overall saving on the complete economic paint scheme which can be evaluated at around 100,000 Euros”.

Even before the Majestic returned to drydock, proven fleet fuel savings had already influenced GNV’s decision to further maximize operational benefit and upgrade from Intersleek 700 by coating a further two vessels in the fleet, the La Superba and La Suprema, with Intersleek 900, the fluoropolymer based system offering the very latest advances in foul release technology. The La Superba, completed in March 2007 is the largest cruise ferry in the world and was the first vessel in Italy to be coated with Intersleek 900.

Smoother, tougher and with better foul release capabilities than its silicone based predecessor, Intersleek 900 has now been applied on over 50 passenger vessels worldwide.