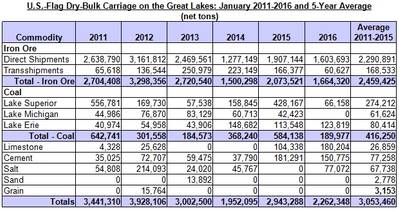 U.S.-flag Great Lakes freighters carried 2.3 million tons of dry-bulk cargo on the Great Lakes in January, a decrease of 23 percent compared to a year ago, according to figures compiled by the Lake Carriers’ Association (LCA).  Iron ore cargos decreased 20 percent, while coal loadings tumbled 68 percent. Shipments of limestone, however, rose nearly 75 percent.

As February begins, most lakers are in lay-up and undergoing maintenance and modernization, but one cement carrier and two liquid-bulk tug/barge units were in service as of February 1.  LCA members will invest upwards of $110 million in their vessels in 2016.

Shipments of limestone and iron ore on the Great Lakes were down in April, trade group the Lake Carriers’ Association (LCA)…