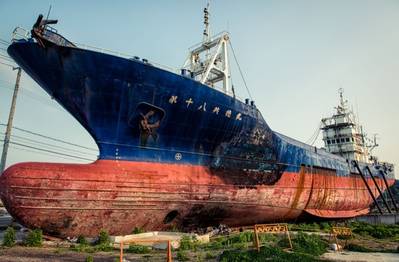 A Japanese town has decided to scrap a marooned fishing boat which has become a symbol of the devastating 2011 tsunami reports the BBC.

Residents of Kesennuma in Miyagi prefecture voted to scrap the Kyotoku Maru No 18 which was swept inland by a giant wave triggered by the earthquake although there had been plans to preserve the vessel as a monument.

Kesennuma, with an estimated population of 70,000, was one of the hardest hit by the tsunami, and
after the disaster, according to the BBC report, people started visiting the marooned 60-metre (200-foot) boat to pray, take photographs and leave flowers.

Citing the Kyodo news agency the BBC add that a non-profit ship recycler has been contacted to dismantle the vessel, which is owned by fishing company Gisuke Gyogo in Fukushima prefecture.