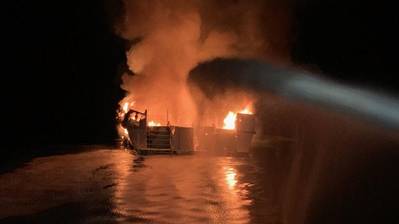 A federal judge in Los Angeles on Friday dismissed the criminal indictment against a dive boat captain charged with manslaughter in the deaths of 34 people when the vessel caught fire and sank off the California coast three years ago.

The 75-foot (23-meter) Conception caught fire while most of those onboard were sleeping, killing 33 passengers and a crew member. It is considered one of California’s worst maritime disasters.

U.S. District Judge George Wu said in a ruling that the indictment, handed down on December 2020 against captain Jerry Nehl Boylan by a federal grand jury, must be thrown out because prosecutors had failed to accuse him of gross negligence.

A spokesperson for the U.S. Attorney's Office in Los Angeles, said prosecutors would seek authorization from the Department of Justice to appeal Wu's ruling. An attorney for Boylan, 68, could not immediately be reached for comment on Friday.

The indictment accused Boylan of causing the deaths through "misconduct, negligence, and inattention to his duties."

The victims had been sleeping below deck when the boat went up in flames while anchored near Santa Cruz Island, off the Santa Barbara coast, during a sport diving expedition. They included a family of five, a teacher and his daughter, a diving instructor and marine biologist.

The five surviving crew members, including Boylan, had been above deck in berths behind the wheelhouse and escaped by leaping overboard as the burning boat sank into the Pacific.

They told investigators that flames coming from the passenger quarters were too intense to save anyone trapped below. Coroners investigators determined the victims died of smoke inhalation.