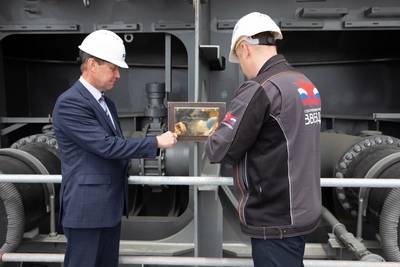 The newbuild is the lead vessel in a series of 15 carriers ordered from Zvezda for servicing the Arctic LNG 2 project. She is the first-ever vessel of such dimensions, cargo capacity and icebreaking capabilities to be constructed at a Russian shipyard.

This ice-class Arc7 vessels are designed to transport LNG year-round along the Northern Sea Route, including its eastern sector. The vessels will have increased icebreaking capabilities and maneuverability in the ice, when compared to the first generation of icebreaking LNG carriers (Christophe de Margerie series).

Each LNG carrier will be 300 meters long, 48.8 meters wide, and will have a cargo capacity of 172,600 cubic meters. The propulsion system includes three azimuth propulsion units, with a total power capacity of 45 MW.

Currently, SCF has 20 large-capacity tankers ordered from Zvezda, with a total deadweight of 1.86 million tonnes and a total cost of more than $5 billion. These include 15 icebreaking LNG carriers and five LNG-fueled tankers of various sizes, for transporting crude oil and petroleum products.

The localization of advanced civil shipbuilding technologies within Russia has resulted from mutually beneficial cooperation between SCF and Russian energy companies, which allows for the scaling up SCF’s competencies in adopting innovative solutions.