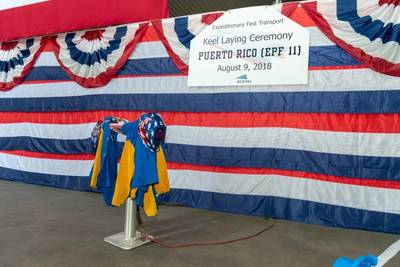 A keel laying is the formal recognition of the start of a ship’s construction, as the keel is the symbolic backbone of a ship. The keel was said to be “truly and fairly laid” as it was authenticated by the ship’s sponsor, Supreme Court Justice Sonia Sotomayor, by welding her initials into the keel plate.

The new ship will be the third ship in naval service named after the commonwealth of Puerto Rico.

Expeditionary Fast Transport ships are versatile, non-combatant vessels designed to operate in shallow-draft ports and waterways, increasing operational flexibility for a wide range of activities including maneuver and sustainment, relief operations in small or damaged ports, flexible logistics support or as the key enabler for rapid transport.

They are capable of interfacing with roll-on/roll-off discharge facilities, as well as on/off-loading vehicles such as a fully combat-loaded Abrams Main Battle Tank. Each vessel includes a flight deck to support day and night aircraft launch and recovery operations.  The EPF class ships will have airline-style seating for 312 embarked forces with fixed berthing for 104.

As one of the Defense Department's largest acquisition organizations, PEO Ships are responsible for executing the development and procurement of all destroyers, amphibious ships, sealift ships, support ships, boats and craft.

HMS Prince of Wales, the second of the U.K.’s Queen Elizabeth Class aircraft carriers, has recently completed a successful…