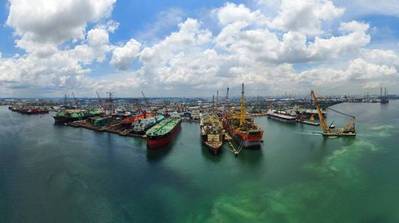 Keppel Corp's offshore and marine (O&M) arm and smaller rival Sembcorp Marine are working towards having an agreement over their business unification in place by the end of April, the companies said on Thursday.

The companies had first announced plans to combine their loss-making O&M businesses in June last year. The deal would see Keppel spin off the new business into a listed entity, with Singapore state investor Temasek becoming the largest shareholder in the combined company.

Keppel's O&M unit, which is one of the world's largest offshore oil rig builders, and Sembcorp Marine have suffered a downturn from supply chain issues and labour shortage. However, a recent surge in oil prices on the back of Russia-Ukraine conflict promises an improving outlook for the industry and new order wins.

The companies said they have made progress on the mutual due diligence and transaction structure of the merger.

"While discussions are ongoing, there is no guarantee that definitive agreements will be executed," they said.

Keppel said it has also advanced in its effort to secure a sale of its O&M legacy rigs to a separate firm named Asset Co, that would be majority-owned by external investors.

Separately, Keppel also announced divestiture of its logistics business for S$80 million ($59.11 million), in line with its 2030 vision to streamline its business structure.