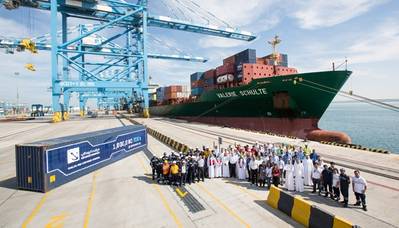 Abu Dhabi Ports Company (ADPC) and Abu Dhabi Terminals (ADT) say that a million TEU containers have been handled at Khalifa Port since its commercial opening.

Khalifa Port began commercial operations at the end of last year when all container traffic was transferred from the city centre port Zayed Port, to the country’s new  flagship Khalifa Port.

In October 2013, more than 100,000 TEUs passed through the port in just one month, and according to the operators these are very significant figures for Khalifa Port and the highest number of containers ever handled in a single month in the Emirate.

Mohamed Al Shamisi, Acting CEO ADPC said: ‘One million containers is an important record for Abu Dhabi, not just Khalifa Port.  It’s a great achievement for everyone working at the port, demonstrating that the container terminal operations are efficiently and effectively handling the growing import and export volumes that the port was designed for.’

By 2030, as part of the drive to diversify the Emirate’s economy away from hydro carbon revenue, Khalifa Port will be able to handle 15 million TEUs a year and together with the adjacent Kizad industrial zone, is expected to contribute 15% of non-oil GDP.