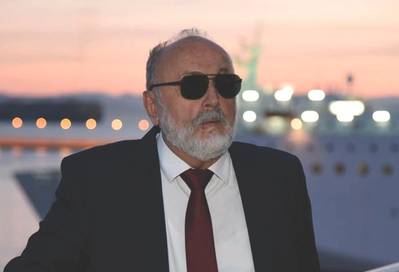 As the maritime market steers toward Athens, Greece and Posidonia 2018, Maritime Reporter & Engineering News interviews Panagiotis Kouroumplis, the Greek Minister of Maritime Affairs and Insular Policy. As the Minister of Shipping for the country with the largest merchant fleet and a millennia-old maritime tradition, Kouroumplis carries his responsibilities with pride and humility.

Born in Aetoloakarnania in 1951, Kouroumplis holds a Law degree and a PhD in Sociology from the University of Athens. But the story of his life was irrevocably altered much earlier at the age 10 when lost his eyesight from the explosion of a hand-grenade, a remnant of WW II. But instead of using his misfortune as a crutch, he turned it into a platform. After attending the School for the Blind in Athens, he became a pioneer of the Greek disability rights movement and was the first blind person to be elected member of the Hellenic Parliament. To this day often cites his own disability to encourage the young to become masters of their own fate.

The Job
The Ministry for Maritime Affairs and Insular Policy operates is a quasi ‘‘one-stop shop’’ for maritime and shipping issues, with aims at:

“Moreover, the Hellenic Coastguard is integrally linked to the administrative structure of the Ministry to perform its institutional mission comprising of both shipping related and operational tasks, amongst which I would discern the huge efforts invested in border control missions and in rescuing hundreds of thousands of migrants and refugees in the Aegean Sea during the past years,” said Kouroumplis.

Greek Shipping Today
Greece has one of the longest and strongest histories as a seafaring nation, and today the shipping industry is one of the most dynamics aspects of the Greek economy, and Greece remains one the world’s largest shipping nations. Traditional fleet profiles including mainly bulk carriers and tankers, but in recent years this has expanded to include high-tech specialty ships, such as LNG and LPG carriers.

As of March 2018, 723 large ocean-going vessels (greater than 1,000 gt) of 74.53 million dwt fly the Greek flag, and the Greek-owned fleet is still first place internationally, with a fleet of 4,148 ships (over 1,000 gt) of 341.92 million dwt, representing 16.4 percent of the global overall capacity in dwt. “The significant contribution of shipping to the national economy is clearly depicted in the foreign currency inflow which for 2017 amounted to 9.13 billion euros (in accordance with the “Transportation” Title of the official “Services Balance” issued by the Bank of Greece) and also in the significant number of jobs created in the country and the multiplying effects through economic added value on other sectors of the Greek economy,” said Kouroumplis.

The Greek shipping cluster is a top performer within the Greek economy, a cluster composed of 1,389 shipping companies (696 in the field of ship management and 693 in the field of chartering/brokerage and other shipping activities) operating in Piraeus, resulting in $2.8 billion entering Greece in shipping foreign exchange for their operational costs. These companies offer direct employment to more than 16,467 employees and are a driving force for the entire maritime cluster.

The Market
While a clear leader, the Greek market has not been immune to economic forces which have conspired to mire maritime in one of its deepest and longest slumps.

“It is well known that the increase in global capacity has impacted the supply and demand for maritime services and consequently caused large fluctuations in freight rates,” said Kouroumplis. “Despite such challenging times for the shipping industry, the figures of Greek shipping remained virtually unaffected. It is noted that in 2017 there was a recovery in bulk carrier orders which was not accompanied by a similar increase in tanker orders. This is explained by the increased demand for ores, food and containers, while the existing tanker capacity proved to be sufficient to meet demand.”

According to Kouroumplis, the best way to stay in business in such a challenging environment is to invest in quality shipping, channel investments to innovative new types of ships and grasp the opportunities inherent in such times. “It is worth noting that according to Allied Shipbroking figures, until Christmas 2017 Greek shipowners purchased 289 second-hand oceangoing vessels worth around $4.6 billion and sold 190 ships to third parties at a price of $2.6 billion. Additionally, in the same year about 65 old Greek ocean-going vessels were sold for scrapping” said Kouroumplis. “On its part, the government exerts every effort to retain a ‘level playing field’, meaning not enabling distortions of fair competition either through regional or protective measures, as well as not allowing unscrupulous operators to distort market conditions, compromise safety and endanger the marine environment.”

Emerging Regulation
As the IMO helps to steer the global maritime industry toward ‘decarbonization’, the Greek industry must also continue its investment in new ships and technology to keep place. “Our country’s standing policy is the recognition of the IMO’s regulatory primacy over regional measures for the global application of a level playing field by analogy to the international seagoing shipping activities for all ships regardless of the flag they fly,” said Kouroumplis.

Specifically he cites the recent MEPC decisions regarding the adoption of an initial strategy on the reduction of GHG emissions from ships as “an important milestone” in the IMO’s efforts to achieve fair solutions for an international industry such as shipping.

“Our country honestly and actively supported the balanced compromise on ambitious and realistic targets, taking into account what is feasible for the shipping industry and what is necessary for the future of coming generations. In this context the vision under the identified ”levels of ambition”, namely to reduce total annual GHG emissions by at least 50 percent by 2050 compared to 2008, while, at the same time, pursuing efforts towards phasing them out, is absolutely shared by Greece,” said Kouroumplis.

“Over the next five years, we look forward to the constructive cooperation with other IMO Member States and other stakeholders in order to effectively implement the Strategy and promote sustainable shipping. Of course, as in all decisions affecting the industry, the specific measures should be realistic and easy to implement, while full decarbonization is obviously dependent upon the eventual global availability of alternative fuels.”

Challenges Ahead
No stranger to challenges, personal and professional, Kouroumplis is pragmatic in assessing the road ahead.

“The maritime industry is the backbone of globalization and international trade,” said Kouroumplis. “The Greek maritime sector is one of the country’s most important sectors and a major supplier of jobs.”

The entire industry is faced with a number of challenges, from the machinery-based technology to reduce emissions to the digitalization trend which is rapidly changing the entire logistics chain. “In order to unleash its full potential and contribute to human wellbeing through growth and development all around the world, we need to advance collaboration, enhance standards and proactively engage with industry and policymakers when shaping the regulatory landscape, said Kouroumplis.

“On a more personal level, I consider being Minister of Shipping of a country with the largest merchant fleet and a millennia-old maritime tradition both a privilege and a huge responsibility. Especially since maritime and port policy are core elements in this government’s plan, namely to leverage Greece’s strategic location by turning it into an energy, transport and communications hub promoting growth and stability in our part of the world. In a sense I have been already compensated by working with some of the most able risk takers in the global business community. I will be truly satisfied when we achieve our policy goals.”