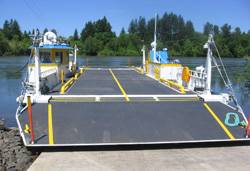 A new cable-guided electric ferry, designed by Elliott Bay Design Group LLC (EBDG), began carrying passengers and vehicles across Oregon’s Willamette River at Buena Vista. The new electric Buena Vista ferry replaces a diesel-powered version which had been in service for more than 50 years.  EBDG was chosen to design the vessel, which was built by Diversified Marine of Portland, OR.  The new vessel was delivered in May, ahead of schedule, to Marion County, the ferry’s owner and operator.

“This ferry has an unconventional propulsion system,” said EBDG Project Manager Mike Complita.  “It’s powered by electricity provided from the shore on a cable that runs across the river.  That electricity powers motors that turn propellers mounted on each side of the boat.”  Special consideration was given to shallow river conditions.  Because the hull is only four feet deep and the summer time river level is not much deeper, the propellers are mounted on the sides of the vessel, rather than underneath, for protection.  This new and more environmentally-sound ferry is composed of welded steel, constructed in an inland barge style, with capacity for 49 passengers and six vehicles.

“The vessel was designed to be simple and cost effective to build,” Complita said.  Elliott Bay not only designed the ferry, but also acted as the owner’s liaison during construction. James Jennings of EBDG’s Seattle office acted as the eyes and ears for the Oregon Dept. of Transportation and Marion County while the ferry was being built.

This project was funded partly through the federal stimulus package, the American Recovery and Reinvestment Act.  The Buena Vista ferry is one of three similar ferries operating on the Willamette River.  Another similar ferry in Marion County's fleet, the Wheatland Ferry, which entered service in 2000, was also designed by EBDG.