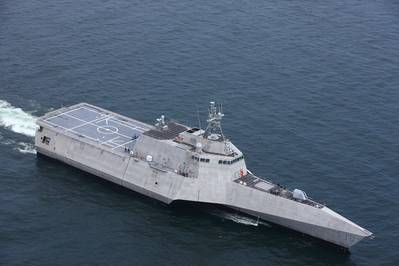 Charleston (LCS 18) will be the third Independence-variant LCS Austal delivers to the U.S. Navy in 2018, (Photo: Austal)

The at-sea acceptance trials, which involved the execution of intense comprehensive tests by the Austal-led industry team while underway in the Gulf of Mexico, demonstrated to the Navy the successful operation of the ship’s major systems and equipment.

LCS 18 will be the third Independence-variant LCS Austal delivers to the Navy in 2018. “By the end of the year, we will have delivered three LCS to the Navy, including LCS 18 – no small accomplishment and a direct result of the hard work and dedication of Austal’s incredible shipbuilding team, the exceptional teamwork with all of our suppliers, and the support of our local, state and federal legislators,” said Austal USA President, Craig Perciavalle.

The LCS class consists of two variants, the Freedom variant and the Independence variant, designed and built by two industry teams. The Freedom variant team is led by Lockheed Martin (for the odd-numbered hulls). The Independence variant team is led by Austal USA, the American branch of operations for Australian shipbuilder Austal, (for LCS 6 and the subsequent even-numbered hulls).

Seven Austal-built Independence-variant LCS are homeported at the San Diego Navy Base. “I was very excited to hear about the great things our ships are doing for the fleet during my recent trip to San Diego, and was even more excited to hear about the Navy’s future plans,” Perciavalle said. “As we continue to grow to a 355 ship Navy, I am confident these small surface combatants will continue to contribute to the distributed lethality of our nation’s global force structure.”

Austal's multibillion LCS program is at full rate production in Mobile, Ala. and is continuing its momentum with several ships currently under construction, including Charleston. Cincinnati (LCS 20) has launched and is preparing for trials. Final assembly is well underway on Kansas City (LCS 22) and Oakland (LCS 24). Modules for the future USS Mobile (LCS 26) are under construction in the module manufacturing facility and construction on Savannah (LCS 28) commenced mid-July.