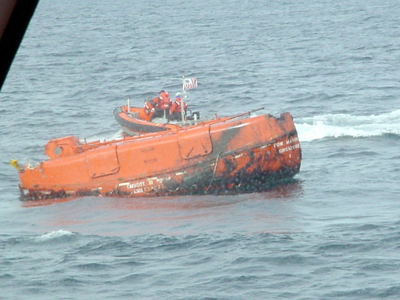 A crew from the Coast Guard Cutter Shearwater approaches a capsized lifeboat from the Bow Mariner. U.S. COAST GUARD PHOTO

The 570-foot Singapore-flagged chemical & oil tanker Bow Mariner sank 15 years ago when the ship caught fire and sustained two explosions, resulting in the deaths of 21 out of 27 crew members, 45-miles off the coast of Virginia, Feb. 28, 2004.

The vessel was transporting over three million gallons of ethyl alcohol on a voyage from New York to Texas. It had previously carried methyl tert-butyl ether, MTBE, in its other 22 cargo tanks that were discharged in New York.

The source of ignition remained unconfirmed, however once the flammable vapors were released from the cargo holds, the likelihood of a fire igniting was significantly increased. This tragic marine incident helped bring forward numerous marine safety improvement impacts and lessons learned.

The formal Coast Guard Investigation Report, conducted by Coast Guard Marine Safety Office Hampton Roads, on behalf of the government of Singapore, highlighted a number of contributing factors; including the failure to properly fully implement the company and vessel Safety, Quality and Environmental Protection Management System, SQEMS. A safety management program is required to be implemented by the vessel and its managing company as outlined in the International Safety Management Code. The vessel’s SQEMS plan called for using inert gas during the discharge of MTBE, which was not followed.

The Coast Guard investigation discovered evidence that regular and effective emergency crew drills were not conducted onboard the Bow Mariner. The ships general alarm was never sounded nor was an announcement made to alert or direct the crew. Current regulations require ships to conduct a fire drill and abandon ship drill monthly.

The loss of the Bow Mariner is considered one of the worst chemical tanker disasters in history and is a tragic reminder of the consequences resulting from unsafe chemical cargo handling practices.