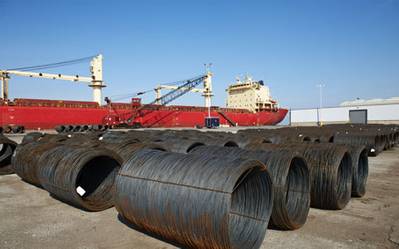 photo courtesy of the Port of Cleveland

The rise in Great Lakes water levels has yet to translate into full loads for the U.S.-flag freighters moving iron ore, coal, limestone, cement and other cargos.  Vessels continue to routinely leave port with less than a full load on board.

The largest iron ore cargo moved by a U.S.-flag laker through the Soo Locks in June totaled 69,576 tons.  The record iron ore cargo for the “Head-of-the-Lakes Trade” is 72,300 tons and was carried in 1997, a period of near record-high water levels.

Vessels in the coal trade continued to depart loading docks with capacity to spare.  The largest coal cargo through the Soo Locks totaled 67,992 tons, nearly 5 percent less than the record of 70,903 tons.

Vessels in the short-haul trades below the Soo Locks likewise are still unable to maximize their carrying capacity.  A river-class laker that delivered 13,000 tons of limestone to a dock along the Saginaw River was still 3,000 tons short of its rated capacity.  A 14,000-ton cement cargo discharged in Detroit and Cleveland represented only 80 percent of the vessel’s rated capacity.

“The rise in water levels has allowed vessels to carry larger cargos than a year ago,” said James H.I. Weakley, President of Lake Carriers’ Association.  “However, water levels will begin their seasonal decline in the fall, so the fact even more carrying capacity will be unusable makes the recent passage of the Water Resources Reform and Development Act even more important to the Great Lakes Navigation System.  That legislation designates the Lakes as a system in terms of dredging and increases spending from the Harbor Maintenance Trust Fund.  Passage could not have come at a better time, for it is clear higher water levels cannot themselves restore the Great Lakes Navigation System to even functional, let alone project dimensions.  Only increased funding will end the dredging crisis on the Great Lakes.  It was gratifying to see the House of Representatives add nearly $58 million to the Corps’ national budget yesterday.  Surely some of those dollars will come back to the Lakes.”

The U.S. Army Corps of Engineers estimates approximately 18 million cubic yards of sediment clog Great Lakes ports and waterways and pegs the cost of dredging that volume at more than $200 million.  The Harbor Maintenance Trust Fund, the depository for a tax levied on cargo to pay for dredging, has a surplus of more than $8 billion.

The Baltic Exchange's main sea freight index jumped to a more than two-month high on Tuesday, propelled by gains across vessel segments…