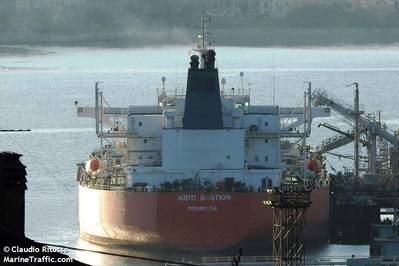 Libya's National Oil Corporation (NOC) lifted force majeure on all oil exports on Friday as a first tanker loaded at Es Sider after a half-year blockade by eastern forces, but said technical problems caused by the shutdown would keep output low.

"The increase in production will take a long time due to the significant damage to reservoirs and infrastructure caused by the illegal blockade imposed on January 17," NOC said in a statement.

A first cargo of 650,000 barrels will be shipped by the Kriti Bastion Aframax tanker, chartered by Vitol, which two sources at Es Sider port said had docked and started loading on Friday morning.

The blockade, which was imposed by forces in eastern Libya loyal to Khalifa Haftar's Libyan National Army (LNA), has cost the country $6.5 billion in lost export revenue, NOC said.

"Our infrastructure has suffered lasting damage, and our focus now must be on maintenance and securing a budget for the work to be done," NOC chairman Mustafa Sanalla said in the statement.

Control over Libya's oil infrastructure, the richest prize for competing forces in the country, and access to revenues, has become an ever-more significant factor in the civil war.

The internationally recognised Government of National Accord, supported by Turkey, has recently pushed back the LNA, backed by the United Arab Emirates, Russia and Egypt, from the environs of Tripoli and pushed towards Sirte, near the main oil terminals.