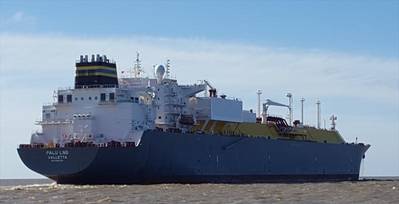 Tankers were entering and leaving Cheniere Energy Inc's Sabine Pass liquefied natural gas export plant in Louisiana despite draft limitations in the Sabine-Neches Waterway after a rig ran aground in the channel over the weekend.

The U.S. Coast Guard said a large semi-submersible rig, called the Jasminia, drifted into and ran aground in the Sabine Bank Channel, limiting vessels entering the waterway to those with a maximum draft of 36 feet (11 meters).

The waterway sits on the Texas-Louisiana border and connects the Gulf of Mexico to Cheniere’s Sabine and oil refineries in Port Arthur and Beaumont, Texas.

That area is west of where two hurricanes—Laura and Delta—struck in recent weeks. Nearby refineries are owned by Exxon Mobil Corp, Valero Energy Corp, Total SA and others.

Without naming the vessels, the Coast Guard said it tested the movement of two ships with drafts over 36 feet through the waterway and said it will entertain future movement requests exceeding the 36-foot limitation on a case-by-case basis.

There is another tanker at Sabine, Flex Resolute, which arrived on Friday. It currently has a draft of around 36.1 feet, which is 88% of its maximum, according Refinitiv data.

Separately, Cheniere said on Tuesday the cause of a fire on October 11 in Train 1 was still under investigation and the equipment—within a thermal oxidizer—remains isolated while repairs take place.

Cheniere’s 3.5-billion cubic feet per day (bcfd) Sabine plant was pulling in about 3.0 bcfd of feedgas on Tuesday.