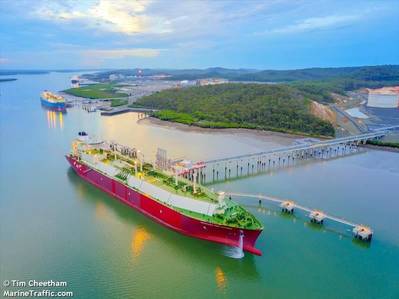 The tanker Maran Gas Vergina has arrived in China with the first delivery of U.S. liquefied natural gas (LNG) in 13 months, shipping data showed on Monday.

This is the first shipment since March 2019 after a long-standing trade war in which China raised tariffs on LNG imports from the United States to 25% last year.

Aboard is a cargo that loaded at the Freeport LNG plant in Texas.

Three more U.S LNG deliveries are expected in China in April and two cargoes are scheduled to be discharged in May, Refinitiv data showed.

Two of the vessels expected in April, the Palu LNG and the Cool Explorer, loaded at Cheniere Energy's Corpus Christi plant in Texas and its Sabine Pass plant in Louisiana, respectively, according to the data.

Another vessel, the SK Resolute, loaded at Sempra LNG's Cameron plant in Louisiana.

The vessels expected in May, the Gaslog Geneva and the Arwa Spirit, are carrying cargoes loaded at Sabine Pass and Corpus Christi, respectively.

Beijing has started granting tax waivers to LNG importers, three sources told Reuters earlier this month, with two of them adding the tariff had dropped to zero, though a separate value-added tax of 10% still applies.

China announced in February that it would grant exemptions on retaliatory duties imposed against 696 U.S. goods after both sides reached a Phase 1 trade deal that took effect on Feb. 14.

As the coronavirus lockdowns continue to put pressure on LNG demand in some of the key markets, an LNG trader said there were signs of "going back to normal" in China, with demand there slightly recovering.