Louisiana Gets US DOT Loan to Launch New Ferry Service 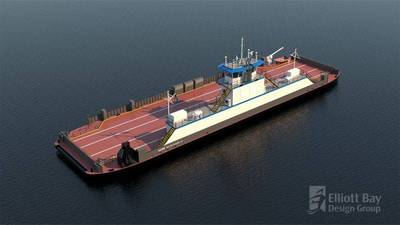 Louisiana is set to launch a new ferry service with the help of a low-interest loan from the U.S. Department of Transportation (DOT).

The DOT said on Monday its Build America Bureau will provide nearly $41 million in loans to the Louisiana State Bond Commission for the benefit of the Louisiana Department of Transportation and Development (LADOTD) that will go toward the ferry project as well as a bridge improvement program.

The Bureau, which was established during the Obama Administration, helps communities across the country reduce the costs of infrastructure projects by providing Transportation Infrastructure Finance and Innovation Act loans, known as TIFIA loans, and other types of financing. The Bipartisan Infrastructure Law, signed by President Biden in November 2021, expands project eligibility for the Bureau’s TIFIA credit program and extends maturity of the loans, giving borrowers additional flexibility.

A $19.2 million loan is for the Cameron Parish Ferry Project to provide ferry service between the Calcasieu Ship Channel on LA 27 between Cameron and Holly Beach in Cameron Parish. The scope of the project includes the design and construction of two vehicle/passenger ferries, each capable of carrying at least 35 automobiles and six semi-trucks and 500 passengers.

The LADOTD announced in October that it received an apparent low bid from Houma, La. based Thoma-Sea Marine Constructors for the construction of two new ferry boats for the Cameron crossing in Cameron Parish. The bid was $49,706,865.

In addition, a $21.7 million loan is for the Statewide Bridge Program which consists of six projects, including replacement of 11 structurally deficient bridges in rural areas across six different parishes throughout central and eastern Louisiana.

The projects qualify for TIFIA’s Rural Project Initiative, which offers loans for up to 49% of the project’s eligible costs, as well as fixed interest rates that are half the U.S. Treasury rate.

“USDOT’s support for these ferry and bridge projects will help Louisiana keep people, goods and services moving across the state,” said Deputy Transportation Secretary Polly Trottenberg. “We are excited to support Louisiana’s efforts to improve infrastructure, connectivity, and safety for rural communities.”

“These are the fifth and sixth loans that Louisiana has closed over the past year as part of a bundle approach, which allows for more efficient processing and expedient closing. This is a model for projects around the country as we put infrastructure funding from the Bipartisan Infrastructure Law to work,” said Executive Director Morteza Farajian.