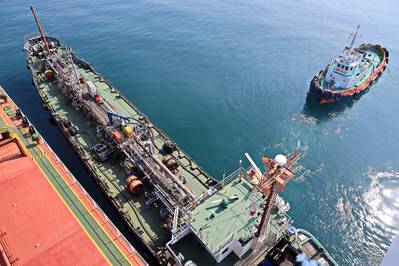 New rules that entered force at the start of 2020 to reduce sulphur emissions from ships are leading to significant hikes in vessel operational expenditure, members of theshipping industry say.

Using low sulphur fuel oil (LSFO) can add as much as $20,000 to the operational expenditure for each ship per annum, said Sacha Cornell, fleet manager, Norbulk Shipping, speaking during a webinar organized by trade association management company Maritime AMC. “I would guesstimate that the extra cost for additional sampling, onboard test kits, increased purifier maintenance, supply and installation of cermet piston rings, treatment chemicals, additional filtration equipment is in the region of between US$10,000 and $20,000 per ship per annum,” he said.

There are numerous cases in which very low sulphur fuel delivered onboard contains undesirable substances, resulting in problems relating to fuel stability, storage, handling treatment and processing on board, Cornell added during the Bunkering Challenges 2021 webinar.

Citing one example, he recalled a vessel receiving a batch of very low sulphur fuel in Rotterdam. Ship and barge samples were taken and analyzed, with the fuel recording a total sediment reading of point 7.075—well within the ISO parameters. But after 24 hours use, the ship’s purifier and fuel system were blocked, requiring engineers to carry out repetitive cleaning of purifiers and sludge discharge piping every 24 hours.

“Until the vessel had consumed all the bunkers, the crew had no option but to handle the problem onboard which is not a good situation for any engineer or ship owner to be in, especially when you are unable to make a claim against bunker supplier,” he said.

Enhanced testing of suspect bunker could not identify the cause of operational problems and thus no basis for a claim against supplier.

Kjeld Aabo, director new technologies, MAN Energy Solutions and Chairman CIMAC Sub-Group WG 7 F – Fuel, said, “It is very sad to hear there still are issues but it's definitely not something which is being reported [to CIMAC and ISO].”

While Aabo acknowledged a problem with very low sulphur fuel in early 2020, he said quality has “returned to normal”.

“In the beginning of 2020 we saw quite an increase in cylinder liner scuffing and excessive wear is, of course, not acceptable. By August, we were back to normal,” he said, emphasizing the importance of having ceramic coated piston rings to better control wear on the liner surface.

In reference to cat fines, Aabo recalled one instance where 2000ppm was found in one sample, “but CIMAC and ISO say it is not a big problem today. Ship operators are now used to the procedures and know how to better use the lube oil and the low sulphur fuel.”

Bunker training and sampling procedures were recurrent themes throughout the CSI-branded webinar, with Cornell explaining that Norbulk has implemented various preventative measures to safeguard against bunkering problems.

“Crew training is vitally important,” Cornell said. “When you talk to some crews about the importance of the sampling process, and how to make sure that the sampling is done well, and is a true representative sample, I find, unfortunately, a lot of times they're not fully aware of the implications if they do not get it right. There should be more education in this area.

Bunker consultant Neil Lamerton agreed: “Often the crew onboard have no idea of the value of bunkers. Obviously, engineers are very good at using the fuel. But I think some owners and manager can do better at educating them on the commercial aspects of what they're actually doing. They need to know what it means financially to the company if it all goes wrong, not just the technical, operational aspect.”

Maritime AMC director and bunker expert Ian Adams, said, “It is vitally important we continue to train our crews and office staff on how to properly and safely bunker fuel in a post-IMO2020 environment.”